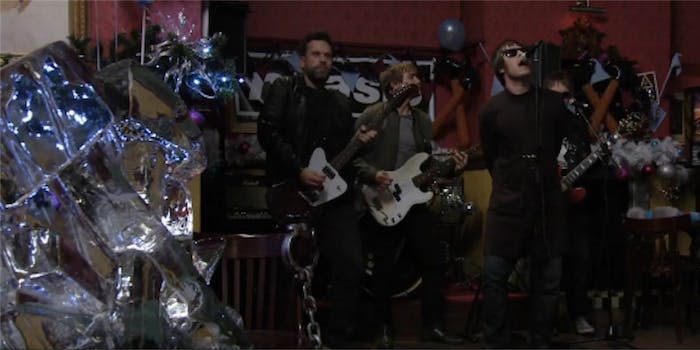 No, it wasn't Oasis. It was actually Noasis.

It’s understandable that Oasis fans have hungered for a reunion since the band of Brits broke up in 2009 because brooding brothers Liam and Noel Gallagher couldn’t get along. But there are no indications that the group will reunite, and in September, a spokesman for Liam Gallagher said that rumors of a reunion were “totally unfounded.”

But that hasn’t stopped fans for hoping and praying and seeing the band in places where it’s not. Like a recent episode of the British soap opera, EastEnders, when an Oasis tribute band appeared and fooled many TV watchers into believing that it was actually the band. The tribute band’s name: Noasis.

Omg @oasis are scraping the barrel aren't they? They'll be on Strictly next #eastenders

Oasis are actually on #Eastenders for real?!?

@bbceastenders Omg is that the real oasis? #Eastenders

my mums just asked was it the real Oasis on eastenders, ya mum they reformed for mick carters stag

This isn’t the first time the specter of Oasis has made an appearance on the show.

But are we really, truly sure that Oasis isn’t going to reunite? It certainly seems that way.