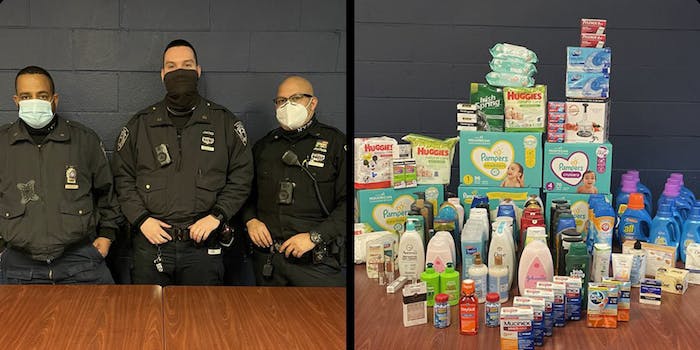 ‘This is cruelty on display’: Cops roasted for ‘bragging’ about arresting people who allegedly stole things like diapers

Over the past few years, police departments have popularized a very specific type of social media post: Photos boasting about a dramatic haul of seized drugs or weapons.

Sometimes these pictures make sense, like the New York Police Department (NYPD) lining up dozens of illegal handguns seized from traffickers. Other times, they become a punchline, like this comically broken-looking antique pistol seized by Toronto cops, or this widely-mocked NYPD photo involving $100 and a few small bags of weed. This week the NYPD is at it again, widely criticized for tweeting a photo of stolen merchandise including diapers, laundry detergent, and cough medicine:

Posted by the verified account @NYPDnews on Wednesday, this tweet was deleted after a few hours due to extensive backlash. In the original post, the NYPD wrote that 12 people were arrested following a shoplifting investigation, recovering $1,800 of stolen goods. The tweet also included a photo of the three arresting officers.

This kind of post typically serves a dual purpose of threatening criminals and advertising the police department’s ability to tackle violent and/or gang-related crimes. But while guns and bricks of cocaine are attention-grabbing images, piles of Huggies and Mucinex send a rather different message.

Twitter users accused the NYPD of cruelty and “stealing from babies,” pointing out that people only shoplift basic necessities like diapers when they’re truly desperate. Within hours, the tweet was deleted.

Many people drew comparisons between the shoplifting tweet and the NYPD’s $6 billion operating budget, along with the department’s history of alleged police misconduct and brutality.

The Daily Dot has reached out to @NYPDnews via Twitter.