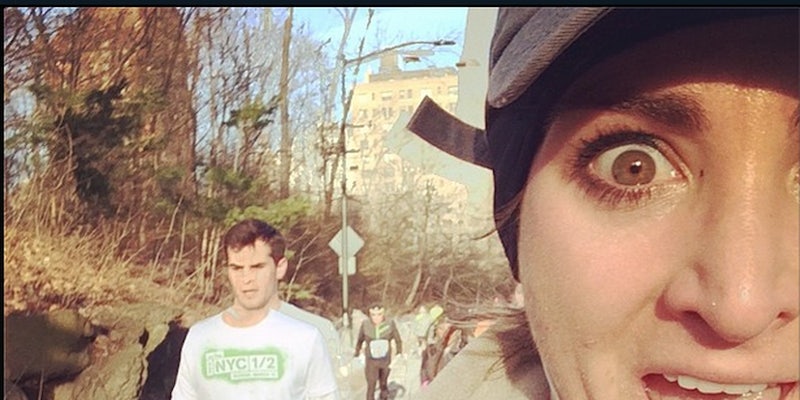 Apparently Kelly Roberts' favorite is the old dude in the short-shorts.

Thirteen miles. Several hours of running, usually by yourself. There are definitely parts of participating in a long-distance run that are—dare we say it—kinda dull.

At this weekend’s New York half marathon, amateur athlete Kelly Roberts dreamed up an awesome new way to mark time on the long road to the finish line: taking selfies with all the hot guys she overtook on the way.

The best part is that it’s pretty impossible to look suave while wearing sweatpants, a ball cap, and an exhausted expression, so well done for making the cut, guys.

Roberts managed to take a selfie with a different guy for every one of the 13 miles in the half marathon, and most of them turned out pretty hilarious. Apparently her favorite is the old dude in the short-shorts, though.

And here we are at the finish line.

Further bonus points to Kelly Roberts for managing to find makeup that stayed more or less intact throughout an entire half marathon. Some of those guys in the selfies could’ve done with some matte foundation of their own.