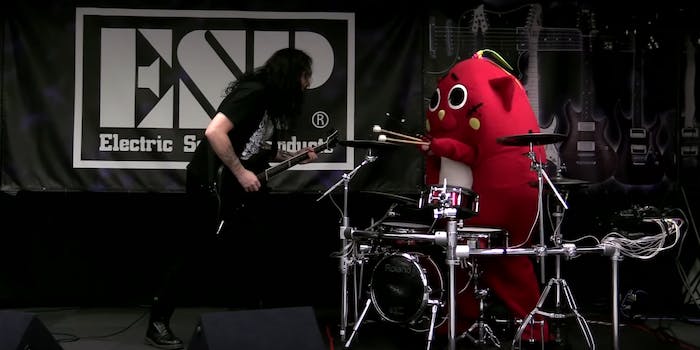 Nyango Star is a hit in Japan—and Americans are starting to catch on.

It’s time for America to meet Nyango Star, the Japanese celebrity mascot who seems to be a cross between an apple and a cat—and who plays the drums particularly well.

It’s easy to see why Nyango Star is so popular in Japan. This video from the character’s YouTube page shows the character in action, teaming up with Frédéric Leclercq of DragonForce.

Here’s another video of Nyango Star drumming along to a track by another Japanese phenomenon, Babymetal.

Clearly whoever is inside that suit knows their stuff. But who is Nyango Star, and where did they come from? The first YouTube video of the character was posted three years ago and is a cover of a song by ’60s instrumental rock group The Ventures, which is still enjoying success in Japan.

As the Daily Dot first reported in 2017, Nyango Star’s popularity grew after a video circulated on Twitter and Reddit. The clip showed the mascot playing the theme song to an anime series called Soreike! Anpanman.

And worked with other celebs, like members of Japanese rock band Golden Bomber.

Domestic cat Shiloh, a sick died due to illness 7 years old. After cremation in the funeral home, buried in the apple field.
A few years later, it revives as an apple fruit. It grows gradually and actually falls to the ground.
I got scratches but I gradually grow up.
Memory was ambiguous but the part as a cat started gradually beginning to return with time.
It reminds me of everything and returns to the owner but from the appearance it is not noticed that it is Shiloh, it is called a wild beast of a red apple.
Although I was able to have a residence but I had to manage it, I consulted the grandfather of the apple tree which is the birth parent.
“Please save the power to please everyone, go to the hill of HOLLYWOOD, and you will be able to return to the former form.”
I could not catch on to denture but I could catch somehow.
Now I think about the way of going to the United States after the dead older trees, and flashed that I can come and go overseas if I become a rock star with a hint of my owner’s drum.
Practice by looking at the owner’s drum, and appearing in local events.
From band fellows, it is said that a name is necessary and is called a legendary drummer “Ringo Star” [sic] from a cat and an apple drummer, “Nyannotate.”
An adventure back to Nikkatsu’s white cat begins.

So … there was a white cat who died and came back as an apple and now it wants to come to America? How will that help them become a cat again? And where did they learn to play drums? There are still more questions than answers. We do know the cat is named after Ringo Starr, which makes sense because the Japanese word for apple is pronounced “ringo.”

And with a tweet that went viral on Tuesday, Nyango Star’s moment in the Western spotlight may have come. Music publicist Eric Alper posted a video of the mascot—going hard on the drums, obviously—with the caption: “When you’re overqualified for the job.”

Wow, one of the best drummers i have ever seen and he or she is in a bloody pink ….suit of whatever the hell that is haha. Now that is talent. https://t.co/s7RqDJuQgE

This guy is my fucking hero for 2018 lol https://t.co/qSptYYUhT7

It seems like it was only a matter of time before Nyango made the leap to Western audiences. Does this mean they will soon fulfill their dream of coming to America? If so, what happens when they get to Hollywood? Will they become a white cat again? Will they still be able to rock out on the drums? Only time will tell.