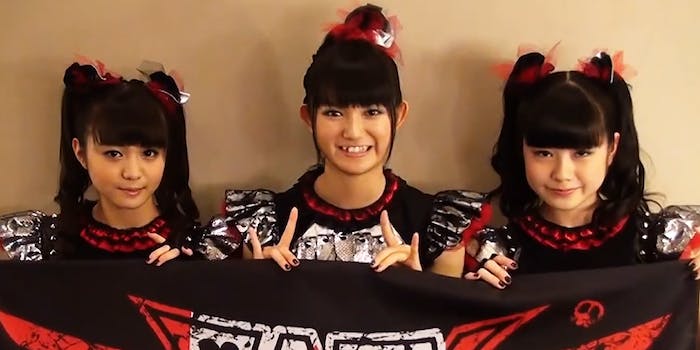 Amid death and a missing member, Babymetal returns to unleash hell.

Babymetal is a beloved rock band that tours internationally. The Japanese act has opened for Guns N’ Roses, and it’s been featured on late-night American TV. Thursday night at the Moody Theater, deep in the heart of Texas where PBS’ Austin City Limits tapes, a nearly sold-out crowd of about 2,500 patrons stood patiently in long lines for merch and sang to their heart’s content.

But Babymetal, really, is a YouTube band—an internet-age marvel that flourished because of its virality. 2014’s “Gimme Chocolate” landed as a wildly juxtaposed presentation engineered to be shared by tagging your Facebook friend in a comment. The band fuses the world-building theatrics of J-pop, where seasoned managers churn out tightly choreographed teen idols, with accessible and loud metal. Picture three teens dressed like Mortal Kombat avatars singing lead for Mudvayne.

Down in Austin at the Moody, making one of only five U.S. appearances before landing in Europe and Japan this year, Babymetal inspired wide-eyed, young fans on the floor to blow bubbles while a dad shielded his apparent young daughter from a circle pit. Asian-American fans weren’t the only folks singing along in Japanese, and in front of me, a bewildered set of adults Googled “Babymetal.”

“Metal resistance, episode VII” a preshow animated video read. It provided a spiraling origin story about how the “chosen seven” was sent by a Fox god to save Earth via, I think, heavy metal. The story was offered as an apocryphal fable, but with enough geeky vigor to make Coheed and Cambria blush. Seven brightly neon onstage setlists hinted at the precise direction the band bows to.

“I’m not sure what I’m about to see,” Stephen Colbert said before introducing the band in 2016. “But I’m pretty excited about it.”

There were gold capes, black flags, and roundhouse kicks on risers.  (With that much fervent choreography, the occasional canned backing tracks get a hall pass.)

There was a four-strong band loudly performing a homespun brand of “kawaii metal,” a vindicating homage to nu-metal. (That double-bass drum music pioneered by angsty suburbanites in the U.S during the late ‘90s.) It can be punishingly simple rock music that comes alive with bass lines that thud like abrupt power outages and screamingly speedy solos.

“Yay Austin… How are we feeling tonight?” frontwoman Su-metal, 20, asked. Then she counted to three and instructed fans to jump up and down. It’d be the night’s only moment of conversational candor.

Babymetal proved it’s a force of nature by weathering real-life tragedy and drama. In January, guitarist Mikio Fujioka, 36, died after reportedly falling from an observation deck.

Only two-thirds of the idols, Suzuka Nakamoto (Su-metal) and Moa Kikuchi (Moametal), 18, appeared when the world tour began this week. Yui Mizuno, 18, who performs as Yuimetal, was missing and hasn’t been seen on the band’s Twitter since November, according to Billboard. Thursday’s 11-song, hour-long show featured two dancers in her absence that served as bizarro members of the band there to pantomime. The surprise lineup led to a social media frenzy on the strength of the #WhereIsYuiMetal hashtag this week, but Babymetal’s management on Friday said that Yuimetal was still in the band, just not touring on the U.S. leg.

In the realm of acts that can trace their careers to YouTube, Babymetal is so much better than Pentatonix.

Pop music emerging from the video-sharing platform’s channels is terrible. That’s because YouTube virality rewards artists who seek fame. You find fame by singing well and hoping your talents land you an audition on reality TV, and that means a commitment to technical precision versus expressionist art.

A YouTube band that tours can be inoffensive and inessential like Pentatonix, corny a capella nerds who come alive at Christmas, or New York City’s Postmodern Jukebox, which built its house on roaring ’20s covers of contemporary hits. YouTube creates a safe and frustrating landscape that’s likewise susceptible to novelty rap songs from aspiring vloggers and comedians. Babymetal is, somehow, transcendent.

The band showed off “Distortion” early in the set, a sprint-paced power metal single. Released this week and featuring an English-language chorus, the song proves that while Babymetal is bound by its pop-savvy and Broadway-minded handlers, the band has the goods to outlive its idol shelf life and swallow all dissenters.

Correction: Yuimetal is not touring with the band on the U.S. portion of the tour but may return later in 2018. Also, this tour features an introduction for episode VII, not XII.