One man dead, one injured after shooting at NSA headquarters

The men were crossdressing, and drugs were reportedly found in their vehicle.

Two people tried to ram the gates of the National Security Agency on Monday morning. Police killed one of the men and seriously injured the second. 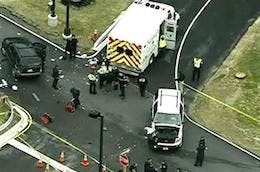 The Associated Press reports that a gunfight ensued after two people in a vehicle attempted to crash into the gates at Maryland’s Ft. Meade, which are located far from the NSA’s main building. An NSA police officer shot and killed one of the people involved in the attack and seriously injured the second.

The names of the two men have not yet been released.

According to NBC News, the men were dressed as women. A search of the vehicle, identified as a Ford Escape, turned up a gun and an unreported amount of drugs.

The injured suspect and an NSA Police officer have been taken to a Baltimore hospital for treatment.

In a statement sent to CBS Baltimore, the Federal Bureau of Investigation said the attack is not believed to be an act of terrorism.

FBI Baltimore is investigating a shooting incident which occurred this morning at a gate at the National Security Agency at Fort Meade just off I-295 in Anne Arundel County, MD. The shooting scene is contained and we do not believe it is related to terrorism. We are investigating with NSA Police and other law enforcement agencies. Our Evidence Response Team is processing the crime scene, and FBI Agents are doing joint interviews with witnesses. We are working with the US Attorney’s Office in Maryland to determine if federal charges are warranted. We have no further information at this time to release.

This story is developing and will be updated with new information as it’s available.

Update 1:30pm CT, March 30: In a statement released to the press, the NSA says police officers “fired on the vehicle when it refused to stop.” 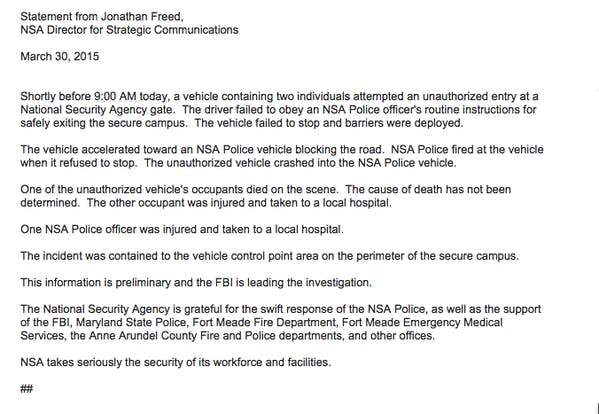 Update 9:08am CT, March 31: According to the Washington Post, the drivers of the Ford Escape may have not realized they were headed into NSA headquarters and had instead made a fatal wrong turn.