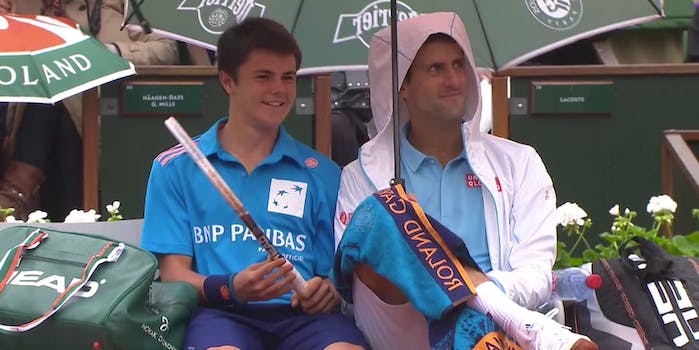 Novak Djokovic’s ball boy is the luckiest tennis fan ever

A small gesture that shocked and amused plenty of tennis fans.

Novak Djokovic may have won his first match at the French Open, but it’s his friendlier side off the court that made the bigger impression.

The tennis player, who just last week donated his prize money from winning the Italian Open to help flood relief efforts in his native Serbia, made a new friend while he waited out the rain delay on his match.

To the amusement of the crowd, he invited the ball boy holding the umbrella over him to sit down with him. What surprised him was that the boy accepted as they chatted and had a drink together.

“We waited for around 10 minutes in the pouring rain on the court, so I felt there’s something I should do and make a new friend,” Djokovic told Reuters. “He accepted the offer to sit down, which I didn’t think he would do. So he’s very spontaneous little boy, and I hope I see him my next match.”