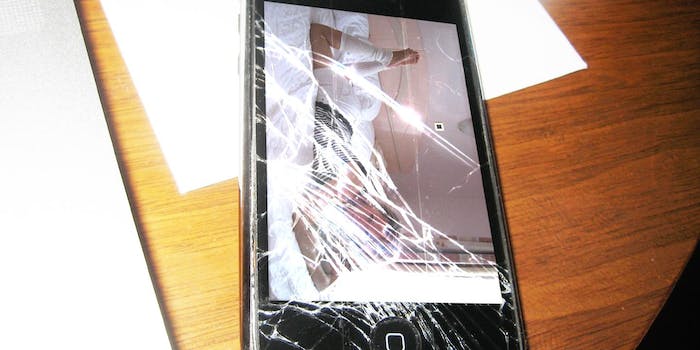 If 'ethical cheating' is considered open-minded, consider me closed.

There’s a new dating site for the “considerate” cheater.

A relative newcomer to the plethora of dating apps and networks, OpenMinded.com targets a novel audience: couples in open relationships, polyamorous individuals, among others who prefer something different than the “monotony of monogamy.” As the Telegraph reports, the site’s on track to attract 250,000 members worldwide in its first year of operation.

There’s just one odd little thing about the connections the site thinks it’s facilitating—or, as they call it, “ethical cheating” Practicing polyamory or non-monogamy isn’t necessarily an act of deception.

If any two words in the English language could be combined to describe the nature of relationships, “ethical” and “cheating” are perhaps the most oxymoronic of them all. Cheating, in itself, is not an ethical act. There’s little to no semblance of a just ethics to be found through cheating. The concept may sound inventive, if not intriguing, for people who may not be hip to the emergent visibility of non-monogamous relationships—or who may feel queasy about engaging in some romantic and sexual exploration. But there is simply is no such thing as “ethical cheating.”

Nothing ethical about cheating, nothing.

Stop calling it ethical cheating, media. Nobody calls it that.

The phrase itself, as positioned by the creators of OpenMinded, actually reflects social stigma against non-monogamous people and their relationships. When it comes to romance, monogamy is considered the default, whereas poly relationships are an “exotic exception,” according to author Laura Betzig. Polyamory—or having romantic or sexual bonds with multiple partners—doesn’t just violate the norm. It’s also seen as inherently dishonest.

If any two words in the English language could be combined to describe the nature of relationships, ‘ethical’ and ‘cheating’ are perhaps the most oxymoronic of them all.

But research shows that simply isn’t true. “They communicate to death,” psychologist Bjarne Holmes told LiveScience. How could it possibly be dishonest to openly share with someone that monogamy is not their preferred approach for relationships? If both parties are clear about the parameters and expectations of a relationship, then it’s a bond rooted in mutual trust—just as it is within functional monogamous pairings.

In that sense, non-monogamy has nothing to do with cheating. Of course, this assumes all parties to such a relationship abide with the understanding they’ve formed, rather than making and breaking the rules as they go along.

There are indeed ways to practice polyamory and non-monogamy that wouldn’t be considered ethical. As Polyamory in the 21st Century author Deborah Anapol wrote at Psychology Today, one of the many ways polyamory can fail is agreeing to it, but then having a “secret affair” when parties agree to communicate in advance about outside sex. Another problem she cites is when someone gets caught cheating in a monogamous relationship, and then tries to transition the relationship into an open one.

These two different polyamory fails have one thing in common: Someone breached trust and engaged in deceptive tactics. Polyamory isn’t based on a lie, but like any other type of relationship, it can be used as a vehicle for deceit and poor decision-making. Equating non-monogamy with a so-called “ethical” form of cheating—as the OpenMinded founders have done for specious marketing purposes—actually reinforces a harmful stereotype against polyamorous types, implying that they’re sexual deviants.

Although the website markets itself as a novel idea, polyamory is hardly a new idea. The practice actually dates back centuries in various world cultures. As Anna Pulley wrote at Alternet, the broader social acceptance of polyamory has ebbed and flowed throughout history, in major world religions, and under the ruling empires such as ancient Greece.

And it’s also not that unique in the world of hooking up online, as the platform doesn’t necessarily add anything unique to the current mix of dating apps. Many other platforms already facilitate a variety of romantic and sexual encounters, from exclusivity to multiple partners or simply casual sex. You get to choose your own relationship—regardless of how these platforms position themselves.

For example, some people use OKCupid to find partners for threesomes within the confines of an open relationship, and a couple may use an app like Tinder or Grindr to openly explore sexuality outside their relationship—presumably on terms they’ve agreed to. The freedom of setting your own profile—and, thus, your expectations—allows users to tailor these options to their needs and communicate them accordingly.

Yet still, OpenMinded founder Brandon Wade thinks the site gives its target audience something they don’t already have. “Open relationships are an underserved market and we want to clean up the space and give people a safe place to meet,” Wade said, in an interview with the Telegraph.

But the function of the platform is vastly different than how it’s being marketed. As Wade wrote in a June 2015 blog post, the founders “want to capitalize on this trend of where romantic relationships are headed in the future and put a positive spin on this movement by using the term for its participants—the ‘Open Minded.’”

Instead of encouraging healthy relationships, this ethos plays on stereotypes while actually condoning unethical ways of practicing non-monogamy. The site irresponsibly makes open relationships and polyamory both synonymous with cheating, framing an unsavory and hurtful behavior as a pleasurable experience for all involved.

Whether you’re monogamous or not, no one likes being cheated on, let alone the cheater. If ethical cheating is considered open-minded, consider me closed.

Photo via Jay Tamboli/Flickr (CC BY 2.0) | Remix by Max Fleishman