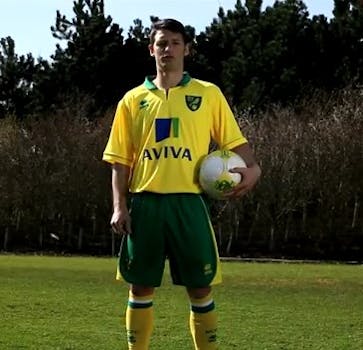 Norwich City Football Club is considering legal action against a fan who tweeted photos of the team’s attire for the 2012-13 season Tuesday night.

Chris Brown, a 17-year-old IT student, leaked the images 12 hours before they were scheduled to be released to the media.

Here’s the kicker: the photos were publicly available for anyone to view on the team’s website. Brown accessed them through the site’s source code as the site was being updated. Norwich resident Brown, who’s a season ticket holder and an ardent fan for the last six or seven years, regretted his decision to share the images and apologized to the team.

“I’m sorry for any offence I might have caused to the club, but I would never do anything malicious or spiteful because I do have an interest and love the football club,” Brown told the BBC.

Brown received a phone call at 4:30 am British Summer Time from the club, just a few hours after the images were shared on the Web. He was asked how he found the photos and where he had shared them.

“We are the guardians of the football club whilst we’re here and so we will protect our property,” said David McNally, the team’s chief executive. “And our property in the digital age involves our intellectual property, so we won’t allow anybody to come in and take it from us.”

It’s not yet clear whether Norwich plans to take further legal action, though some tweeters pointed out that the reveal of the new kit wasn’t all that exciting anyway.

“Norwich City calling the police on a fan for sharing photos of next season’s kit?!” exclaimed Connaugh. “The kit’s exactly the same apart from it has a collar!”

Ironically, the kit’s launch video encourages fans to “show your support for our new kit around the world” and to “pass it on.” For doing just that, Brown could be facing a whole heap of trouble.