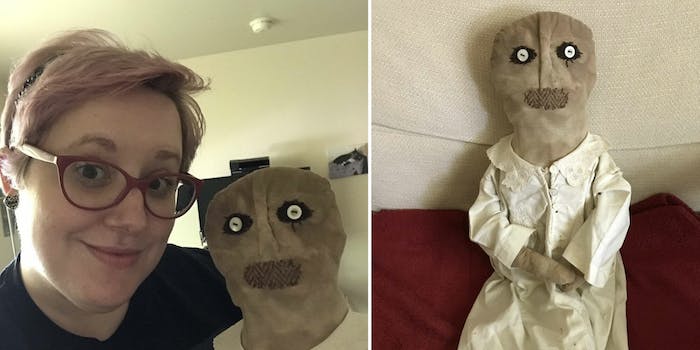 Meet Abigail the doll, who looks like she belongs in a horror movie.

Dolls are like clowns. Some people love them, and everyone else rightfully thinks they’re terrifying. If you’ve ever stumbled across the internet trade in haunted dolls and thought, “who would be crazy enough to actually bring one of those things into their home,” we have your answer.

Twitter user Nerdy Vixen (@TheNerdyVixen) shared photos over the weekend of an extremely creepy doll that she found in an antique store. “I kept thinking about this doll, seeing its face in my head,” she wrote. “I decided it was time to bring it home today.”

People went nuts and immediately started predicting all the ways the doll was going to kill her. The doll even made it onto the Reddit group r/BlackPeopleTwitter, where many people thought it felt straight out of a horror movie.

You don't bring that doll home. It chose you. It brought you home. It consumed your soul and now you're just doing it's bidding. I'll wait for the future stories about how you're putting pineapple on your pizzas soon.

So far, Nerdy Vixen (who declined to give her real name) has survived several days with this thing in her house. She told the Daily Dot that nothing spooky has happened so far. (But she would say that if the doll was possessing her.) She also says that, despite the doll’s face appearing in her mind for months, she doesn’t think there was any sort of supernatural connection between them. She just found the doll cool, “a little creepy and off-putting, but not scary.”

This isn’t to say that she thinks the doll is entirely mundane, as she said she got a “sense of sadness/loneliness” when she first held her that started to fade once she took her home. Whether the doll is supernatural or not, Nerdy Vixen believes that it’s “definitely not evil” and was probably just a homemade children’s toy.

The doll, which she’s named Abigail—an appropriate name for something that looks like the cursed object of a Puritan teenager—was originally going to live on her dresser. However, taking pity on her spouse, who isn’t entirely sold on his new housemate, she decided that “waking up to that face would be too much” and moved the doll to the living room. This was just after she discovered what might be a bloodstain on Abigail’s dress.

The couple has agreed not to prank each other by moving the doll around, so if Abigail does find her way back into the bedroom while they’re sleeping, at least they’ll know she did it by herself.

Abigail now sits in the living room on a little bench that reads “Time Out,” as apparently, the Nerdy Vixen is doing everything she can to live up to the archetype Reddit has bestowed on her. Rather than an appropriate sense of dread, she finds provoking the doll funny.

However, she did take one sensible precaution: watching to see how her cat, Tweety, reacted to the doll when she got it home. But Tweety, who apparently “never hisses at anything,” didn’t react to Abigail negatively.

The internet’s reaction to Abigail has taken Nerdy Vixen entirely by surprise. “I thought I’d post it, and the followers I had would just think I’m silly,” she said. “But a couple of them retweeted it and it blew up! I kinda figured people would compare it to Annabelle, though.”

Her plans for what to do if Abigail does turn out to be the next Annabelle are slightly better developed than the one she had in case Tweety didn’t like her. The first step would be to “burn some sage, ask her to stop” and then, if that didn’t work, “I suppose I could just take her to a different antique shop. Or build a glass case,” she said. A little unfair to the doll’s next victim, but you do what you have to do when you wake up in a horror film.

When asked if she’d consider an exorcism if things got out of hand, the answer was a flat no. While Nerdy Vixen would be willing to find someone to do a binding ritual, she is an atheist and just doesn’t believe an exorcism would work.

Nerdy Vixen intends to keep talking about Abigail on Twitter as long as people are interested. The doll even has her own Twitter account now: @abigail_haunted. So you can follow along with Abigail’s adventures until the moment when she finally consumes her new mother and ascends to destroy us all. In the meantime, enjoy some fan art.

I saw another art enthusiast so I figured I’d mention this classic: pic.twitter.com/hObVJhdBxY