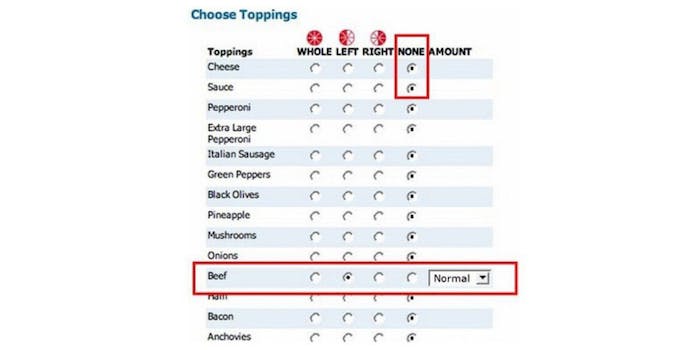 Photo via The Sneeze Remix by Jason Reed

The eternal legacy of ‘none pizza with left beef’

Domino's orders will never be the same.

Back in 2003, Big Bang Theory writer and showrunner Steve Molaro was working a creatively unfulfilling job and needed an outlet. So, he took to blogging. Molaro fired up his laptop and purchased a domain name, penning his first post for the Sneeze at the beginning of July and briefly going in on the controversy surrounding the Hot Brown.

The Hot Brown is a sandwich, a Kentucky legend created by Fred K. Schmidt back in 1926. The big debate hinged on its key component: a sauce made of either gravy or cheese, depending on who you asked. “Whichever side you take, I think we can all agree that the name ‘Hot Brown’ isn’t vile and unfortunate at all,” Molaro joked in the post that brought him one step closer to viral fame.

“I loved the Domino’s service because you could go online and order pizza without actually having to talk to anyone and it would just show up,” Molaro tells the Daily Dot. “It’s less of a novelty now, but at the time that was a fun, new way to avoid social interactions.”

Better known as “none pizza with left beef,” Molaro’s order was more of an add-on than the main event. He just wanted to see if Domino’s really would put all the mushrooms to the right and the pepperoni to the left on his large pizza. An eagle-eyed friend noticed the “none” option and the rest was history.

“That post got popular very quickly. Most readers loved it, but some people would get annoyed and claim that LEFT and RIGHT in the box is subjective, even though I addressed that in the article,” Molaro recalls. “You may not know this, but on the internet, sometimes—very very rarely, but sometimes—people like to complain about things.”

The haters have historically been drowned out by a meme-hungry internet craving that sweet “none pizza” goodness, which transformed into the “special delivery” meme. As Know Your Meme notes, soon others were forcing the likes of Domino’s and Pizza Hut to draw pictures inside the box, cut pizzas like pentagrams, and hopefully bring consumers and pizza parlor employees that much closer.

Asking for a spiral cut pizza or one giant slice made from the whole pie isn’t all that ambitious for the palette, though. “None pizza with left beef” works wonders with minimalism. It’s like nothing you’ve ever normally ingested unless you’re picky as hell. It’s literally, as Molaro puts it, “tasteless bread with salty meat pellets.”

“My wife is the one who ate the None Pizza Left Beef,” Molaro says. “At the time she didn’t know she was eating a future D-List internet celebrity. I guess the fact that she ate it means it wasn’t bad.”

He was only tipped off on his meme creation powers years later through email. Since then, Molaro’s received a whole lot of love and even some swag. “There were costumes and shirts and some people even made necklaces on Etsy!  I’ve actually gotten one of those necklaces,” Molaro says. “I only wear it when I need to look extra-super-sexy.” 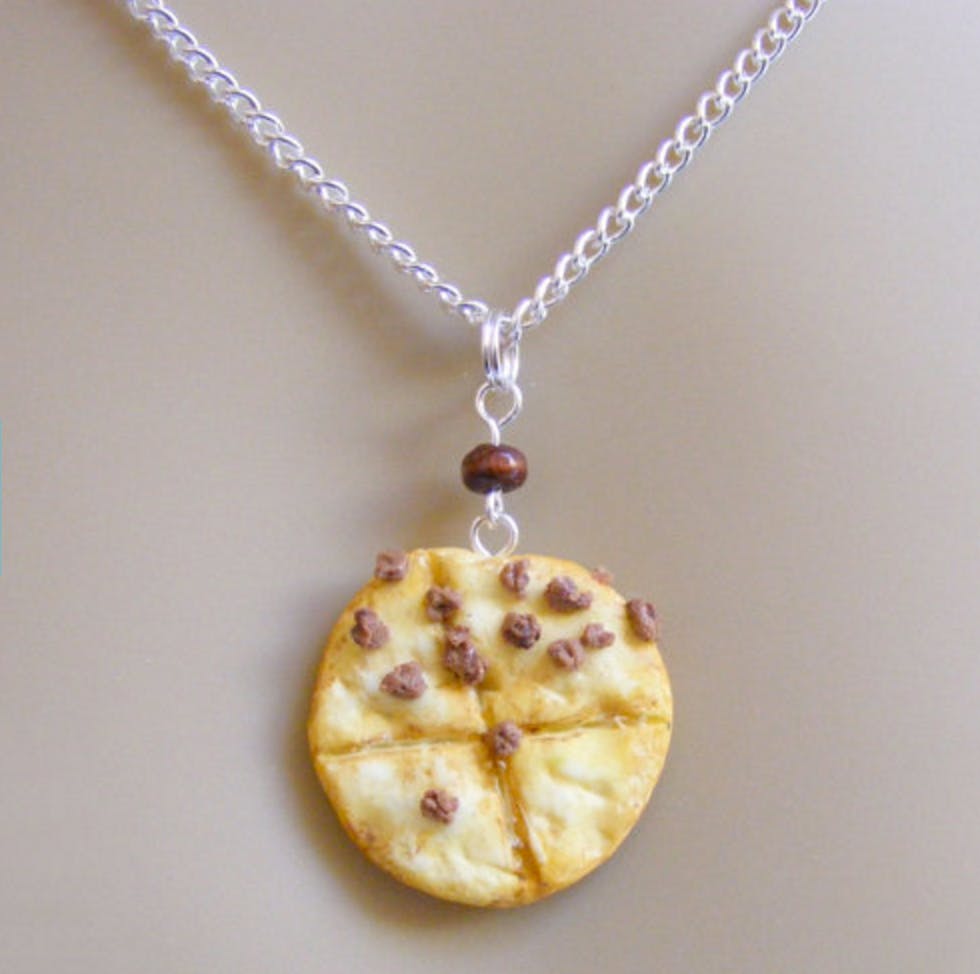 None Pizza with Left Beef necklace

The necklace sells for around $15 and has been purchased countless times. Those who rock it praise the instant meme recognition, especially on “none pizza” day. Molaro didn’t celebrate this year, but he’s certainly contemplating doing something once his meme creation hits the big 1-0.

“Maybe next anniversary I’ll strut around the house wearing nothing but a bejeweled crown and my None Pizza Left Beef necklace,” Molaro jokes, throwing in “a pepperoni scepter for extra sovereignty.”

After nearly eight years of serving up food and humor, the Sneeze published its last post in 2011. Its essence lies in the “Steve, Don’t Eat It!” series, a collection of posts in which Molaro tries everything from prison wine to Beggin’ Strips and stale Urkel-O’s, though he swore the Family Matters-inspired cereal was delicious 13 years later.

Food anchored the Sneeze. Even Molaro’s coworker Melissa Rauch wants him to give “Steve, Don’t Eat It!” another go.

“I loved writing the Sneeze very much.  I met a lot of wonderful people through the site and it actually opened the door to many cool jobs, like the one I have now,” Molaro says, adding that he still owns the domain and certainly wants to preserve the legacy of not only “none pizza with left beef,” but the blog that effectively launched his career.

“If I took it down,” he explains. “How else would people know I drank my wife’s breastmilk 13 years ago?”