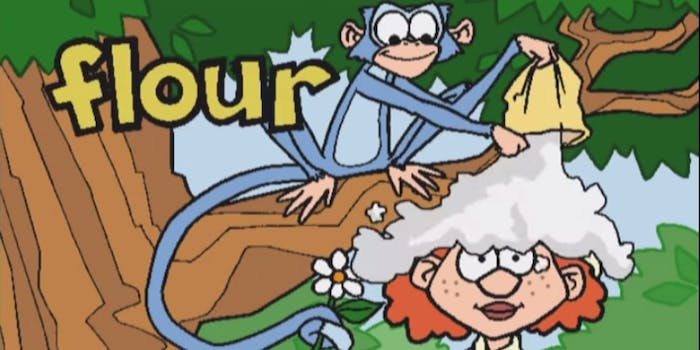 It’s been a week since Utah social media manager Tim Torkildson was fired from his position as blogger at a Provo language school. His crime? Writing a blog post about homophones. (Not homophobes, homophones.) He claims his supervisor told him the post made the school appear to be promoting a gay agenda.

Who knew the difference between “red” and “read” could be so incendiary?

Torkildson’s supervisor, Clarke Woodger of Nomen Language School, told the Salt Lake Tribune on Tuesday that the post in question had been too complicated for their students, most of whom are learning English as a second language. He also said that Torkildson had a tendency to “go off on tangents” in his blog posts.

(That last part is definitely true. Read on.)

But Woodger’s account is not quite how Torkildson described it in his own blog post about the incident:

“I’m letting you go because I can’t trust you” said Clarke Woodger, my boss and the owner of Nomen Global Language Center. “This blog about homophones was the last straw. Now our school is going to be associated with homosexuality.”

I said nothing, stunned into silence.

“I had to look up the word” he continued, “because I didn’t know what the hell you were talking about. We don’t teach this kind of advanced stuff to our students, and it’s extremely inappropriate. Can you have your desk cleaned out by eleven this morning? I’ll have your check ready.”

It’s hard to understand what about the post provoked such an extreme reaction. Maybe something about the way it was written was inappropriate for a language school? 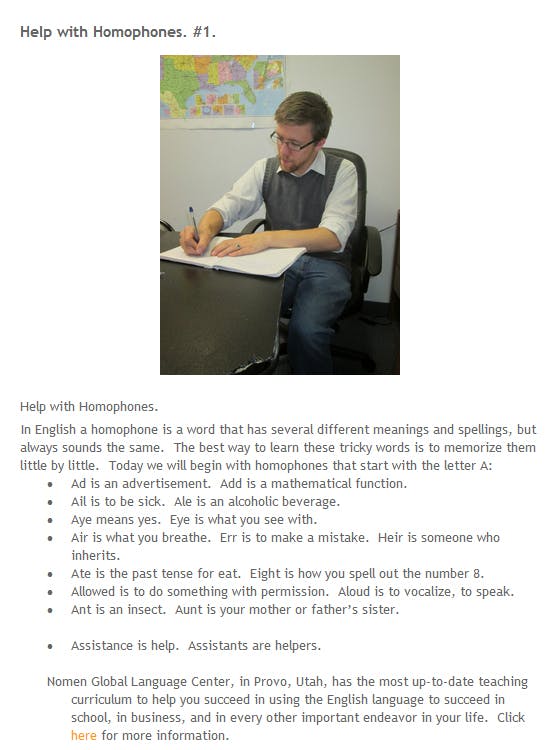 Given that homophones are found in many languages, and that English-speaking children begin learning to identify homophones as early as elementary school, it seems odd that Nomen would find the subject too advanced for their students. To emphasize this, Torkildson ended his baffled blog post about the firing with a colorful kid’s chart explaining basic homophones: 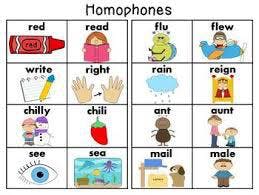 But the Internet is far more preoccupied with Nomen’s alleged homophobia than with its actual grammar setbacks. Nomen’s Facebook page, which was active at the time the Tribune published its article on Tuesday, has since been deleted. Given the kinds of reactions the news has spawned in comments to the school’s blog post and Twitter feed, it’s a fair speculation that the Tribune‘s linking the school’s Facebook led to the page being inundated with angry Internet users.

“I’d probably think twice about getting any kind of education from this language school since the school administrators don’t seem to know the meaning of common English words themselves,” wrote another. “Sounds like a very amateurish operation run by homophobic and unintelligent people just after the money.”

[email protected] When you learn English at NomenGlobalArb you don’t learn anything but bigotry and ignorance.

What’s more damaging to a language school? Being thought of as gay, or not understanding basic language concepts? http://t.co/5oIXxOX6G3

Youch! At this rate, you might think the school is regretting its decision to fire Torkildson.

Then again, maybe not. Torkildson’s blog wasn’t all kid-friendly: He recently wrote about soiling his pants and taking a dump in a local gas station urinal.