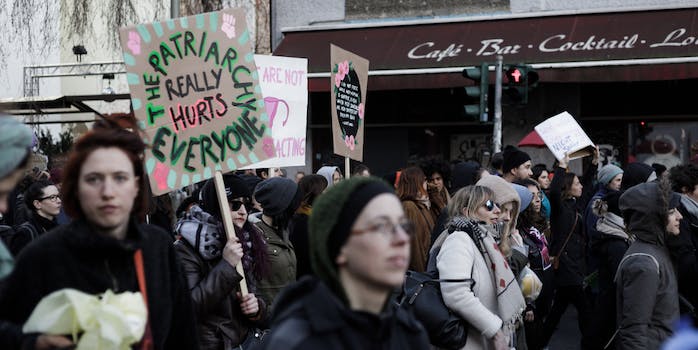 According to Noah Revoy, women malfunction without it.

Last Friday, an inhabitant of the “manosphere” declared that the movement to dismantle the patriarchy is bad.

“Women need the boundaries of the Patriarchy and a mission in life which is usually a husband, children, and home,” Noah Revoy tweeted. “Absent such structure they malfunction and destroy civilizations. #RestorePatriarchy.”

Women need the boundaries of the Patriarchy and a mission in life which is usually a husband, children and home. Absent such structure they malfunction and destroy civilizations. #RestorePatriarchy

The manosphere, for those fortunate enough to have avoided it thus far, is a loose collective of MRA’s, pickup artists, incels and other groups of angry men who blame women and feminism for all of their problems. A believer in evolutionary psychology and hardwired differences between men and women, namely that women are designed to be submissive to and ruled by men, Revoy also believes Western civilization is facing a demographic threat thanks largely to the weakening of patriarchal institutions.

Women generally progress faster under coaching than men. They are more behaviorally plastic. They are generally capable…

Women all over the internet, as well as quite a few male feminists, are gleefully tearing his tweet and the accompanying hashtag, #RestorePatriarchy, to pieces.

This man apparently teaches us "dangerous and forbidden knowledge". I had no idea the crap your drunk uncle mutters about on Thanksgiving while farting on the couch watching football was so scary.
Anyway, I malfunctioned today so I'm off to destroy civilization, wheeee! https://t.co/gYXymcMkpd

I can't believe that #RestorePatriarchy is a thing.

#RestorePatriarchy needs to start telling the truth. You are afraid, nay terrified, of women. Men always have been and always will be. That’s the reason you wish to control us. Own your own fear you bunch of candy asses!

There were some who took the matter seriously and tried to explain in good faith why he was wrong (and they should probably get some sort of prize for it to be honest).

Yeah, people,not just women, need structure in their life, need to feel a purpose, a goal to strife for.. ..that can be husband, children and home. But can also be religion, their work or a specific social goal. And sure, if many people feel lost of this, civilization takes a hit

While Twitter user @dosbottim dragged both the past Revoy is so fond of and his current theories for how society should operate.

Genuine medieval belief: without regular exposure to “the male essence” (ie: sperm) women’s humors become unbalanced and she becomes unstable, and that is why she must be married her entire adult life. Because she must not risk her soul to remain stable….

And when someone’s beliefs are reminiscent of the 14th century, it’s time for self reflection. Because they have fucked up for sure.

A lot of people were laughing about the apparent fragility of this strong, stable system Revoy sees as so essential to saving the world.

Hey, we built the strongest civilization that has ever existed, and if you go out without permission you're going to break it!

maybe the civilizations were asking for it

While some women took the hint and got to planning on destroying civilizations.

oooooohhhhh this is interesting. Since I have no husband or children (thankfully) which civilization should I destroy?

I consider not having children my gift to the planet. My DNA isn't that special. I've lived a hedonistic life of supporting myself and others by educating them and feeding them. What should my next target be?

Noah, stay out of this. We’re planning how will end civilization starting by your misogynist kind. Now, shoo.

Meanwhile, a Twitter user calling himself “the Michelangelo of Dick Stuff” offered an alternative explanation for why these guys are Like This.

All these dudes are actually just subs, and they haven't accepted it. If you want a daddy, just go get one guys, you don't need to proscribe social structures onto everyone else to feed your need for a big strong man to take charge.

Twitter user @wilke_drxwilke may speak for us all in the end: “I appreciate this ‘who to block’ PSA. Thank you.”

I appreciate this "who to block" PSA. Thank you.