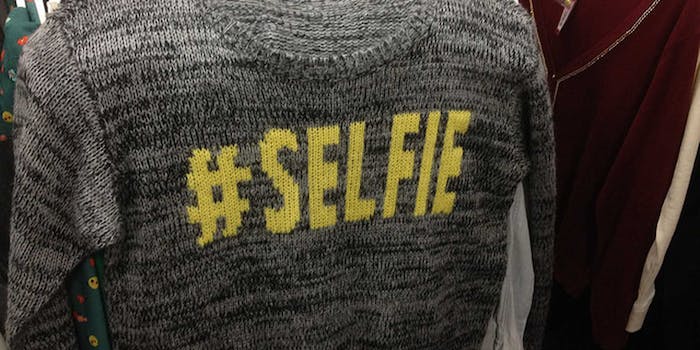 One Alabama sorority has reportedly banned selfies for its members, but they're hardly the first.

The latest selfie craze may be banning them. Over the weekend, news broke that the University of Alabama’s chapter of the Zeta Tau Alpha sorority decided to ban selfies for its members. According to one Bama undergrad, the sorority is requiring pledges to sign social media contracts in which the pledges must pledge (say pledge one more time) “no selfies.”

The sorority thinks that selfies can be embarrassing or perhaps negatively taint their reputations. Which might sound prudish and antiquated (especially given college ladies’ propensity to snap up them selfies on the regular), but it could be a smart move in avoiding a variety of consequences.

The Bama Zetas aren’t the only group that have an issue with self photographry on photo-sharing apps. Behold: A short list of all the places, people, or situations in which a selfie has been effectively banned.

In the name of safety, the marathon’s organizers outlawed self portraiture.

The aftermath of the Philippines disaster

After some police officers and other officials were caught taking selfies of the wreckage following Typhoon Yolanda, they were outlawed in the area (at least for policeman).

After the selfie seen ‘round the world made headlines, the photographs were barred from being taken at Mandela’s coffin viewing.

…Or at your house. Or really, wherever you happen to be with your ballot. This actually depends on what state you live in, but we’d suggest erring on the safe side. Just, don’t take a selfie with your ballot, OK, Beyoncé?

The pastor of this Illinois church would like you to please refrain from taking pictures with the creche, or Nativity scene. Likely applicable to Christmastime only.

Soon, that baller selfie with the pet lion your uncle from Dubai bought you may be illegal. Also, endangered animals in general look like a no-go.

This Irish pub in Toronto allegedly isn’t a fan of selfies.

In the driver’s seat

… has no interest in your selfies.

This Brooklyn dance club doesn’t care if you got your hair done and your nails done too and your outfit and you’re in your shoes (thus concludes this article’s sampling of Destiny’s Child’s “Jumpin Jumpin”). No photos, no Instagram, no selfies.

Derek Jeter doesn’t allow cameras whatsoever, so a selfie with the Jeets in his natural habitat is out of the question.

This Michigan college wants to ban selfies. Actually it just wants to ban “selfies,” as in the word … which is a weird gripe, but OK.

This user complained about being told to stop it with the selfies at the Globe’s Wanamaker Theatre and was told via Twitter all photography distracts from from the “experience of the space.”

No cell phones, no selfies.

Relax! Only the NYPD are banned from dating site selfies. At least, uniformed selfies.

This bar in New York’s Chinatown is not down with the selfie love.