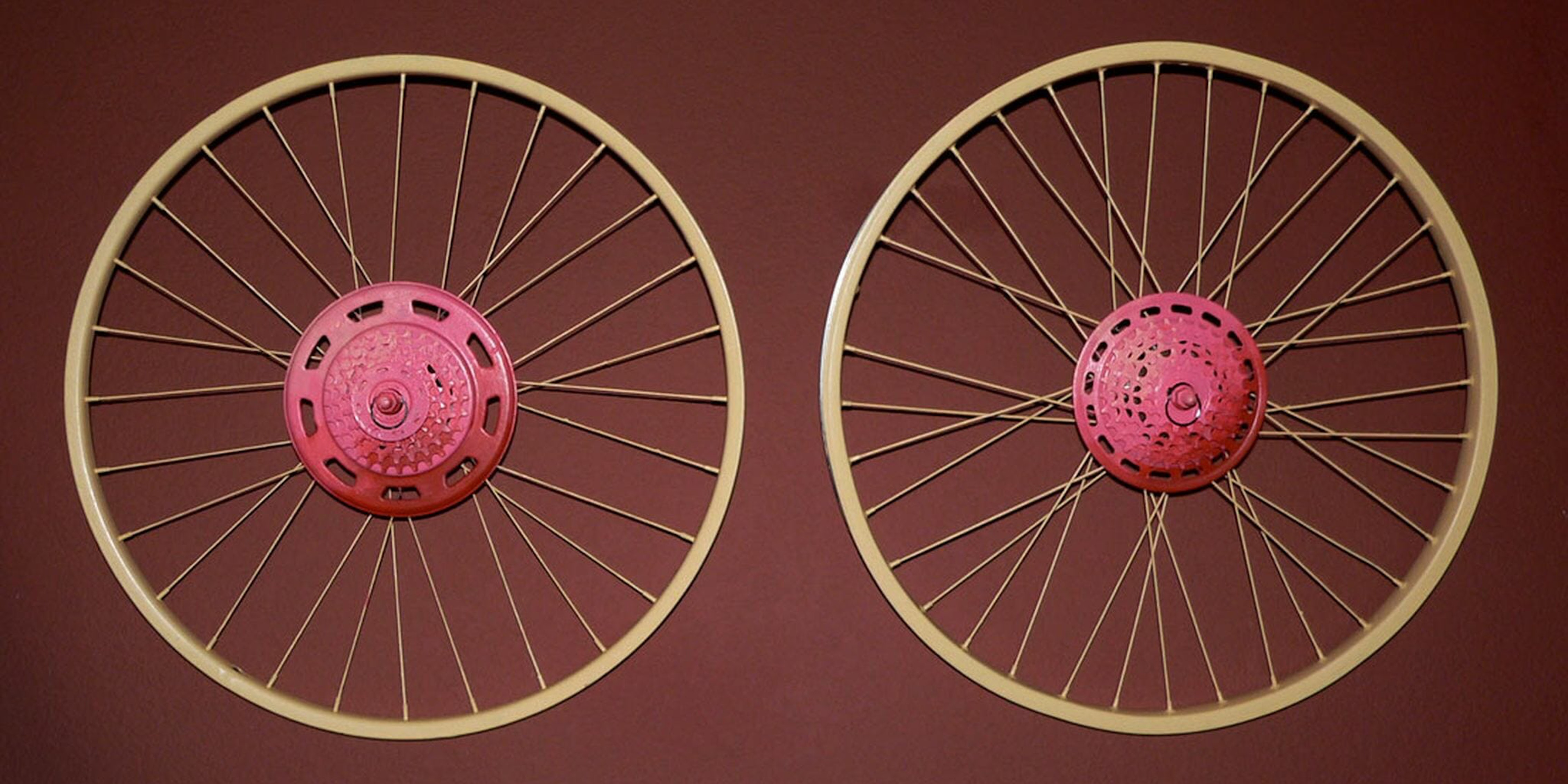 Keep your bra on and donate to breast cancer research instead.

It’s #BreastCancerAwarenessMonth—which means that the world is awash in pink. You can get pink ribbon sprinkles for your cupcakes and ice cream. You can dress your dog in a fluffy pink ribbon sweater. You can get an official NFL football with a pink ribbon on it—so that you can raise awareness while you field passes. You can even get a pink-ribbon clad Nintendo DS, presumably so that you can feel like you’re curing breast cancer while outwitting Wario. All of these products are meant to somehow combat breast cancer, but very few of them actually do anything concrete.

According to the organization Think Before You Pink, a pink ribbon slapped on an item can signify almost anything and doesn’t mean you’re actually donating money or supporting breast cancer research:

Any company can put a pink ribbon on its products. The widely recognized pink ribbon symbol is not regulated by any agency and does not necessarily mean it effectively combats the breast cancer epidemic. Some products sport pink ribbons to try to communicate that they are “healthy” and don’t contribute to breast cancer, such as a number of natural health and beauty products. Other products have a pink ribbon in order to indicate that the company supports breast cancer programs, even if the company’s contributions are not tied to the purchases of the specific product bearing the ribbon.

This is exactly why that emblematic pink ribbon has become a symbol of the larger issue of “slacktivism”—the kind of armchair activism that allows you to take little actual action on a social issue but still feel good about yourself. After all, the pink color of your rad sneakers or the ribbon on your coffee mug—paired with a Bible verse and the word “courage” in bold letters—is helping someone, right?

When confronted with fact that shelling out money for a special pink-washed version of a product doesn’t do much—if anything—to combat breast cancer, many people will just shrug and mumble something about awareness.

You can even get a pink-ribbon clad Nintendo DS, presumably so that you can feel like you’re curing breast cancer while outwitting Wario.

That nebulous idea of “awareness” was purportedly the driving force behind Tuesday’s #NoBraDay, a hashtag campaign on Twitter that asked women to post braless selfies to social media. As EJ Dickson reported last year for the Daily Dot, it’s “unclear exactly where #NoBraDay originated.” Dickson writes, “#NoBraDay is clearly the heir apparent to similar campaigns like Save the Ta-Tas, which was criticized for sexualizing breast cancer awareness back in 2013.”

Barbara Brenner outlines these exact issues in the documentary Pink Ribbons Inc., which have made breast cancer the “poster child of cause marketing”—chiefly because of the issue’s ties to female sexuality.

Twitter users agreed, lambasting the campaign for pointlessly belittling an important issue. British journalist Lily Bailey argued that while the campaign’s heart is in the right place, it’s methods are not. “Pert nipple selfies is not the reality of cancer,” Bailey wrote. Los Angeles-based writer Liz Dwyer concurred: “As a survivor who’s srsly fed up w/ pink Breast Cancer Industrial Complex, this #NoBraDay idea is BS. Not wearing a bra does not save lives.“ And writer, actress, and activist Mara Wilson tweeted: “By all means, take cute selfies. But don’t pretend it’s for this.”

As someone whose mother died of breast cancer, fuuuuuuuuuuck #NoBraDay. By all means, take cute selfies. But don't pretend it's for this.

In an interview with the Daily Dot, Wilson—whose mother died of breast cancer when she was 8— further explained why she’s frustrated by the tactics of these campaigns. Mara Wilson said that she dislikes not only the sexualization of breast cancer but also the mindset that’s sadly prevalent in slogans like “Save Second Base”—the idea that a woman is not a woman without her breasts intact.

“Breast cancer has been sensationalized because it affects a sexualized body part,” Wilson explained. ”The reality of it is not pretty and pink, and often a mastectomy is a woman’s only chance to get better. Yet we value the breasts over the women.” Her comments are reminiscent of Angelina Jolie’s 2013 decision to have a double mastectomy—over the cries of men on Twitter who felt that “cutting off her rack” “kinda makes her pointless.”

This is exactly why that emblematic pink ribbon has become a symbol of the larger issue of “slacktivism”—the kind of armchair activism that allows you to take little actual action on a social issue but still feel good about yourself.

Wilson also argued that “awareness is something of an empty promise.” She said, “Most people do not… give to groups that, for example, provide free mammograms, help women living with breast cancer, or help find a cure. … There are many more types of cancer and diseases that could use the publicity.”

Wilson’s comments illustrate the crux of the problem with awareness: It is often deployed as little more than a buzzword, a way of generating a lot of talk but not much else. In some cases, when facts and figures are being shared that the public might not yet be aware of—for example, highlighting statistics on deaths of trans women—raising awareness can be a positive and beneficial act. In the case of breast cancer, however, it accomplishes little.

An example of a successful awareness campaign would be the ALS Ice Bucket Challenge, whose videos of both celebrities and non-famous people being doused in freezing water took the Internet by storm last summer. At the time, the campaign was criticized for being yet another example of meaningless activism—as well as for wasting water during a record-breaking drought in California. One estimate calculated that “over 6 million gallons of water have been poured out in the name of Lou Gehrig’s Disease.”

But there was one crucial way that the ALS challenge succeeded where Breast Cancer Awareness Month so commonly fails. The campaign raised enormous amounts of money for ALS research—to the tune of $115 million dollars. Those donations quickly had a critical impact on finding a cure for the ailment—contributing to researchers at Johns Hopkins University isolating a particular protein that fails in the cells of most ALS patients. This breakthrough could lead to better prevention and treatment options for millions of Americans.

The reason that the ALS Ice Bucket Challenge worked was because it tied a fun way of disseminating information about the disease to a concrete action—in this case, making a donation to a specific charity that is known to use a percentage of the money it receives for research.

Wilson’s comments illustrate the crux of the problem with awareness: It is often deployed as little more than a buzzword, a way of generating a lot of talk but not much else.

In contrast, part of the reason campaigns like #NoBraDay fail is because they don’t encourage donations to charities that fund research or aid women living with breast cancer; another reason is that they’re not sharing anything anyone doesn’t already know. We’ve already gotten the message that breast cancer exists. What we need are campaigns that raise awareness about how to check breasts for lumps, when and where to get mammograms, and how to access free or subsidized health services.

We also need greater public understanding of what campaigns to support and why. Online activism can be very effective in a variety of ways: It can mobilize people, it allows information to be shared at an incredible speed, and can create a positive sort of peer pressure where people become more likely to engage with a cause because they see others doing so. The problem is that it can be tricky to discern which activism is useful and which is not. Bandwagons are fun, and people don’t always think critically before adding their voices to a campaign.

When approaching a new campaign, it’s important for people take a moment and consider what the message actually is and who it benefits. Will what they’re sharing actually help anyone? Or are they doing it primarily because they want to look good or be part of the crowd? Ultimately, it’s on us to figure out what campaigns deserve our attention and which should be ignored. A hashtag can only survive on social media so long as people are using it.

So if we want online activism to be successful—and we should—we as a culture need to work harder to make sure the right campaigns succeed.