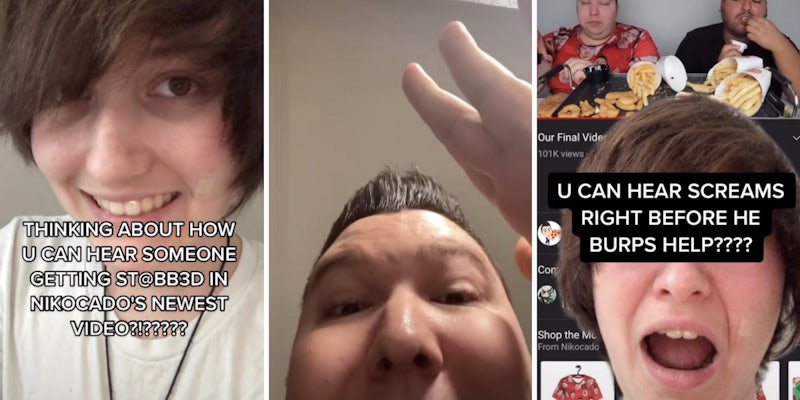 'Imagine they play that in a federal court room.'

Fans of Nikocado Avocado were left concerned after hearing what sounded like screams in the background of one of his videos.

In a video uploaded on March 5 titled “Our Final Video Together,” the mukbang YouTuber and his ex are in the middle of eating nuggets and fries when, at the 34-minute mark, multiple screams can be heard in the distance. Neither man appears to hear them.

Viewers were the first to notice the sounds, and quickly pointed them out to Nikocado via social media.

He eventually addressed the situation via Instagram stories, saying, “Apparently someone got stabbed in my building. And in my video, the evidence was there at the 34 mark. I honestly don’t even know what to make of this.”

It wasn’t immediately clear from his reaction whether there had been confirmed stabbing in his building or if the YouTuber was just going off of the screams, but his additional comments left fans even more worried than they already were.

“I feel horribly that this even happened. No one deserves this, no matter someone does to you, or makes you feel a certain way,” he said. “You have no right to take a life.”

TikToker @some_gay_altima reposted the clip, drawing nearly 5 million views from people trying to figure out what exactly happened. Many also expressed curiosity as to whether the mukbang video would ultimately be entered into evidence if there was an actual stabbing in the building.

“Imagine they play that in a federal court room,” one viewer wrote.

The Daily Dot has reached out to Nikocado via email.