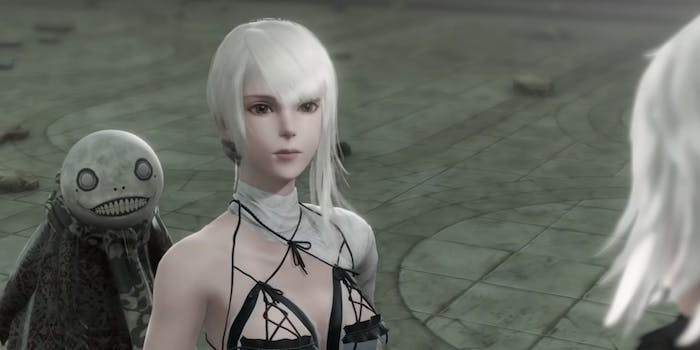 The game rewards people for looking up Kaine's skirt.

The video game Nier Replicant is under fire this week after the new remake was revealed to include a transphobic joke. It’s an uncomfortable moment that’s marring the largely positive reception toward the long-awaited remake, titled NieR Replicant ver.1.22474487139.

The criticisms in question revolve around an intersex character named Kaine. In the new game, you can earn “achievements” by looking up her skirt, effectively outing the character as intersex. Once the player has done this enough times, they’re rewarded by the message, “You risked life and limb ten times to discover someone’s secret.”

As Jade King explains in The Gamer, the game also explores Kaine’s backstory and intersex identity in a more nuanced manner elsewhere. This “achievement” is a reference to similar trophies in earlier parts of the Nier franchise, where players earned rewards by looking up a female character’s skirt. But in the context of Kaine as an intersex character, this idea feels doubly gross and tone-deaf, treating her body as a dangerous secret for the player to forcibly uncover. Judging by early responses to the remake, some players are pretty displeased already.

People are also pointing out that this upskirt gag feels jarringly inappropriate given the otherwise thoughtful portrayal of Kaine as an intersex character. Basically, this isn’t a game where most people would expect this kind of joke to appear.