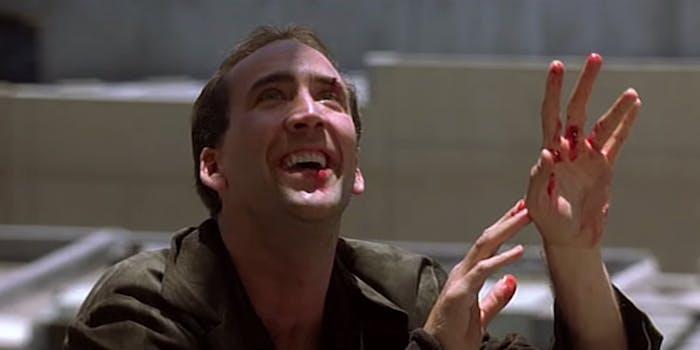 This supercut of Nicolas Cage laughing is a true national treasure

Mark Heiliger took the time, patience, and possible loss of sanity to gather every single laugh from every single Cage film.

Nicolas Cage’s laugh is a thing to cherish, but you no longer have to go through his filmography to hear it.

Mark Heiliger took the time, patience, and possible loss of sanity to gather every single laugh from every single Cage film (excluding the animated ones) into one 20-minute supercut, which somehow captures each giggle and eye-raising cackle as Cage’s career descends and rises into… something. It more than eclipses all of his freakouts. Cage’s eyes get even wider and the laughs get even crazier as it goes on. It’s almost too much to take in.

Be careful when embarking on this all in one go. We know what happens when we watch too much Cage in a short period of time.