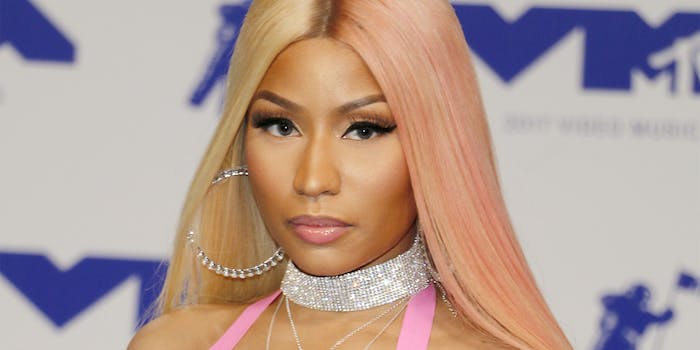 Nicki Minaj accuses media of misrepresenting her views on vaccination

Minaj was criticized for tweeting that the COVID-19 vaccine made her cousin's friend impotent.

Without actually attending the Met Gala, Nicki Minaj was one of the most attention-grabbing celebrities of the night. While other celebs were walking the red carpet, the singer courted controversy by speaking out against the Met Gala’s vaccine policy. The gala required guests to be vaccinated, and Minaj wasn’t.

“If I get vaccinated it won’t [be] for the Met,” she tweeted. In an earlier tweet, she also pointed out that she’s caring for her baby son without help from a nanny. “Not risking his health to be seen,” she wrote, suggesting that childcare was the main reason she wasn’t attending the gala.

The tweet about Minaj’s baby was quickly overshadowed by her apparent anti-vax sentiments, which included a bizarre anecdote about her cousin’s friend. According to Minaj, this man supposedly got swollen testicles and became impotent after getting the COVID-19 vaccine. Twitter immediately latched onto the testicle story because, well, it’s ridiculous. But as the night wore on, Minaj struck back at her critics, accusing them of misrepresenting her tweets. She was particularly angered by MSNBC host Joy-Ann Reid, who accused Minaj of spreading anti-vaccine misinformation.

“Imagine getting ur dumb ass on tv a min after a tweet to spread a false narrative about a black woman,” Minaj tweeted.

Minaj accused news organizations of ignoring her later tweets, where she expressed more positive views of the COVID-19 vaccine. Responding to a fan who said they received the vaccine with no ill effects, Minaj wrote, “That’s amazing babe. This is the norm.” She also said that people should get the vaccine if their job required them to do so, adding, “I’m sure I’ll b vaccinated as well cuz I have to go on tour.” However, this isn’t the same as endorsing vaccination as a lifesaving measure.

Confusingly, she also struck out at news organizations that accurately reported her tweets. Sharing a screencap of a Variety headline, Minaj tweeted, “Never said this. Glad all my tweets were left up.” But the headline literally quotes one of her tweets.

While Minaj did say she was avoiding the Met Gala out of concern for her baby son, she still tweeted “if I get vaccinated it won’t [be] for the Met.” That’s a pretty straightforward statement against the Met Gala’s vaccine mandate, and it understandably inspired more headlines. As a celebrity with a massive online fanbase, Minaj has a lot of power to spread misinformation, which in this case could be a risk to public health.

Minaj’s Twitter timeline is full of mixed messages about the safety and efficacy of vaccination, ranging from her incendiary “swollen testicles” story to a tweet where she says she had the “exact same symptoms” as vaccinated people who caught COVID-19. While this isn’t an aggressive argument against vaccination, it still plays into popular misconceptions and conspiracy theories about covid-19 vaccines.

In reality, while some vaccinated people do catch the virus, vaccination prevents serious illness and slows the rate of infection, saving countless lives. There’s no evidence that COVID vaccines cause impotence or swollen testicles… although COVID-19 itself may lead to erectile dysfunction.