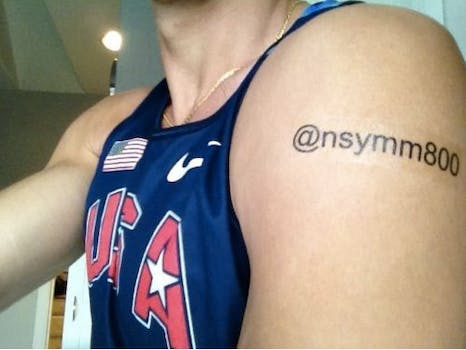 For sale: Your Twitter handle inked on an Olympic runner

800M runner Nick Symmonds tells the Daily Dot about his controversial auction. Do we hear $5,000?

Your Twitter handle could be prominently featured in the upcoming Olympic games.

Nick Symmonds, an 800M runner who ran in the 2008 Olympics and plans to do so again soon in London, is hosting a bold eBay auction.

“I will wear a temporary tattoo of the Twitter name of the auction winner in every single competition I run in this year, 2012, on my left shoulder.”

To be clear, people won’t be able to see it when he’s actually running any Olympic or International Association of Athletics Federations (IAAF) races. Due to IAAF rules, advertising on any athlete “is prohibited, including…tattoos.”

But that’s part of the point, Symmonds told the Daily Dot via email, because the IAAF “almost completely takes away an athlete’s ability to market themselves to sponsors.”

Symmonds said he got the idea from watching Adam Nelson, who in 2005 turned to eBay to auction off his services to be a spokesman to any company for one month after the Olympics. MedivoxRX Technologies won with a $12,000 bid, and after the Olympics, Nelson spent 30 days helping MedivoxRx sell its “Talking Bottle.”

Asked if the winner of the auction would get a refund if he ended up ineligible for the Olympics, Symmonds didn’t reply. Instead, he pointed to his first-place finish at the 2008 trials, that he’s never finished lower than second at the USA Outdoor Championships, and the fact that the top three qualifiers at the Olympic trials will go to the games in London.

Symmonds currently has two sponsors, Nike and Melaleuca. It’s possible the tattoo won’t even conflict with sponsorship rules, if a regular Twitter user wins the auction.

“I chose a Twitter handle over say, a corporate logo, because I want fans to be able to have a chance to bid as well.”
—Nick Symmonds

It remains to be seen if this will end up a protest in name only or a legitimate source of income for Symmonds.

“This may or may not substantially increase my earning for 2012 depending on how high the auction goes. I am pleasantly surprised that the highest bid stands at over $1,800.”