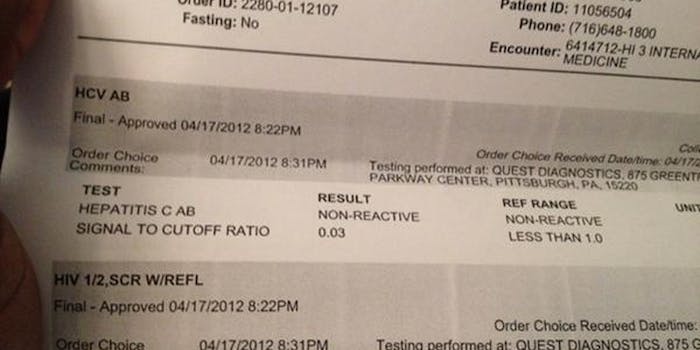 It goes above and beyond telling your fans that you passed your physical.

Buffalo Bills wide receiver David Clowney caused a minor stir after he tweeted a picture of his HIV/AIDS test results, including his date of birth, negative hepatitis scan, and doctor’s address. A phone number visible on the form leads to the Bills’ Ralph Wilson Stadium.

Thankfully for Clowney, he received a clean bill of health. “Got My HIV Results Back!! Thank God for keeping my body healthy and safe,” he wrote.

But he was taken aback Wednesday to learn that anyone thought he was sharing a little too much information. After seeing jokes online about his revelation, Clowney tweeted “I’m never the type to let things get to me,. But it bothers the hell out of me to know people make jokes about AIDS AND HIV!!!!”

Still, some of his fans praised Clowney for setting an example.

“I work in the field of HIV Prevention. Thanks for sharing the importance of getting tested. I hope others follow your example,” tweeted @Dwayne Morrow

The David Clowney Foundation, which Clowney regularly touts on Twitter, is designed to provide mentorship to disadvantaged urban youth. Interestingly, the foundation’s website autoplays a song by rapper Nas titled “I Can,” which includes the line “Careful, ‘fore you meet a man with HIV.”

“Sooo @DavidClowney ONLY ATHLETE I know of that tweeted his HIV *negative* results… This is a time 2 b a FOLLOWER folks!” tweeted Carmella Bella