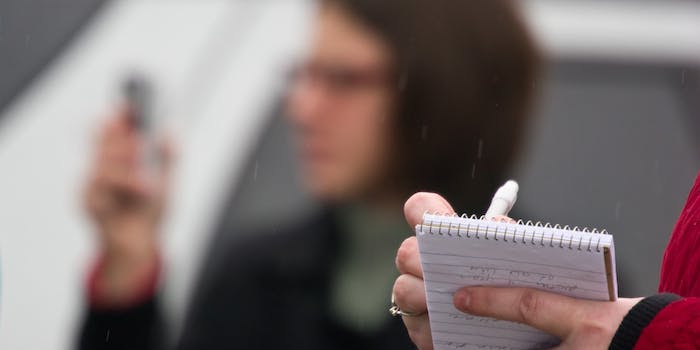 Tired of reporters tweeting draft picks, the league cracks down.

The NFL doesn’t like it when reporters break the news of a draft selection minutes before the commissioner himself gets a chance to announce it on the big stage. That’s why you won’t find any of the newsbreakers at ESPN or the NFL Network, the networks who are broadcasting the draft on national TV, tipping picks before Roger Goodell speaks them into the microphone on Thursday.

That’s probably fine by most NFL fans who like to consume their NFL draft TV coverage with a side of non-spoiled Twitter.

But while a few national reporters in past years have not abided by that embargo, it seems as though fans might not have to worry about spoiler alerts for this year’s draft. That’s because CBSSports.com’s Jason La Canfora—who has caught the most hell the past couple of years for reporting on picks before they hit the podium—told the Daily Dot that he likely won’t be trying to break news on Twitter.

Instead, he’ll be participating in CBSSports.com’s live draft broadcast online from its headquarters in Fort Lauderdale, Fla., so even if he had the desire to break the news on Twitter, he might not have the time to do so.

The other two reporters who have tipped picks in the past also don’t seem likely to try for 2015. ProFootballTalk’s Mike Florio—who stopped the practice in 2013—wrote that once again he’s not inclined to tip picks this year; Fox Sports’ Jay Glazer, who didn’t immediately respond to a Twitter message by the Daily Dot, likely will take the same tact as last year when he tried to report news on Fox’s media outlets rather than on Twitter.

But the difference this year is that the league has made it clear where it stands.

In a letter to NBC, CBS, and FOX that was obtained by The Big Lead, Howard Katz, the NFL’s senior vice president of broadcasting, wrote:

Over the past several years, we have instituted a policy that our clubs are not permitted to reveal their picks via social media or any other platform prior to selections being announced by the Commissioner or his designee at the Draft venue. Our Draft broadcasters, NFL Network and ESPN, also have agreed to not reveal team selections on any platform until the picks are announced by the NFL — this includes an embargo on footage in the Green Room or from a remote location and also a moratorium on network personnel revealing picks during Draft coverage, on other television shows, social media or other platforms. We believe that keeping this information embargoed to the extent possible clearly enhances the viewer experience for the Draft. The result is a better presentation for the 32 million viewers who watched Round 1 in 2014 and the 45.7 million who watched across all three days.

As network partners of the NFL, we encourage and appreciate your coverage of the Draft in Chicago this year and ask for your cooperation with this approach. Please have your reporters and other personnel refrain from revealing picks on social media or other platforms before they are announced in the Draft broadcasts.

It is, of course, ludicrous to ask major TV networks not to break news so it’ll make better TV for the league, but in reality, what are CBS, NBC, and Fox supposed to do? All are major partners with the NFL, just not for the draft, and is it really worth it for the network executives who likely don’t care about the fact that La Canfora and Glazer could beat Goodell to the pick by a few minutes to risk upsetting this country’s biggest sports league?

In the minds of those executives, probably not.

And, it seems to me, the majority of fans don’t want the draft picks to be spoiled. Of course, there was an easy fix for that. Like with all sporting or major TV events, if you don’t want the possibility of knowing something before you want to know it, you should sign out of Twitter. Or, like, La Canfora tweeted in 2013.

To all the Tweets about people unfollowing me, I have a job to do and if you dont want the info, that's cool. I get it. No one has to follow

I'm not trying to win votes and for every person unfollowing, others will want the info. It's about reporting info, not silly Twitter count

Or as Glazer told USA Today last year, “Do you tip? Do you not tip? It’s my job to give you the information as fast as possible. But I’m not just going to do it or tip just to be a [expletive]. I’m going to tell you ‘This is what’s going on here. This team wants him in three picks. This team does also… let’s see if they’re going to move up…’ Something along those lines. I don’t tweet it because I don’t work for Twitter. I save it for Fox Sports Radio. I don’t work for Twitter. I work for FOX.”

The other side of it, though, is that even if people unfollow La Canfora for the night, other people they follow might RT him into the timeline of the person who doesn’t want to know the news beforehand. And that doesn’t include the local team beat writers, who also try to break the news before their individual teams make the pick.

Is any of this that big of a deal? Probably not. But when the NFL—and not the broadcast networks themselves—is trying to set the standard for how its news will be reported, that becomes a problem. It sets a bad precedent, and if there’s anything we’ve learned in, oh, the last two decades, it’s that the NFL doesn’t need more power than it already has.