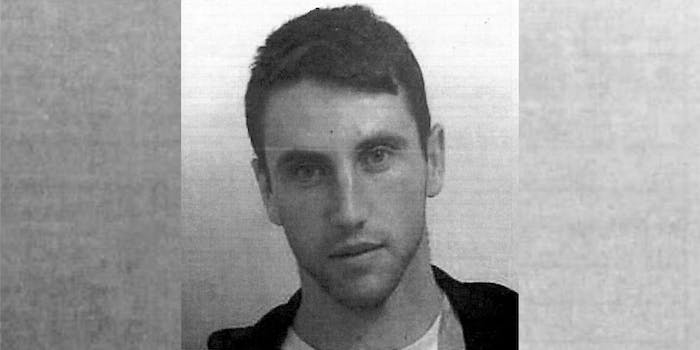 Another felon to feel morally conflicted about.

A 25-year-old Albanian man escaped from the Dungavel Immigration Centre in Scotland on Monday, so police posted on Facebook asking for the public’s help in finding the man. It seemed like a routine crime bulletin. Except that the man is, to some people, very attractive.

The post has been shared more than 400 times, and it’s probably not because people really want to help Police Scotland. The comments are a mix of women complimenting Imerio’s appearance and jokes about wanting to find him.

“He’s a stunningly handsome man… Some wee wifey will come across him in her field and he’ll be found living under her skirt many, many years from now…..” one woman wrote.

Yes, he’s become another “fine felon.” It is not noted in the Facebook post what Imerio was originally detained for, or whether he’d been charged with a felon.

Either way, the Facebook commenters seem to be missing a key element here. The photo of Imerio is in black and white. Everyone looks good in grainy black-and-white photos. We need to see more photos of him. But a Google search of his name on social media sites and Google comes up empty. Did he give police a fake name? Does he even exist? Maybe he’s a really smart felon who is trying to cover his tracks and conceal his identity. Maybe he’s a time traveler.

What if we saw more photos of Imerio? He’d probably look like an average guy. He is being romanticized because of a photo that makes him look like the star of a modern-day Jean-Luc Godard film. Here’s the police’s description of him:

Guxim Imerio is described as 5ft 6, average build with short black hair and brown eyes. He has a clear complexion with an oval face and sharp features, and is possibly unshaven. He is not fluent in English.

When last seen he was wearing a light grey hooded top with a green Liverpool FC top underneath and grey jogging bottoms.

If Imerio is real and does manage to escape the police, maybe he’ll get a modeling deal out of this like Jeremy Meeks. He just needs to make it over to America.