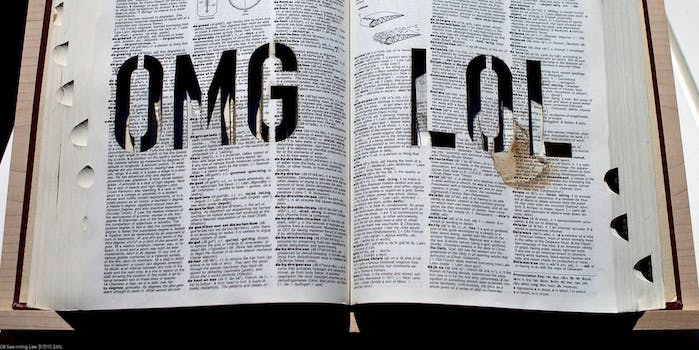 An updated Internet slang guide for the FBI

Wait till they get their hands on the first dude to tweet “IADMACTAAGI.”

The FBI has published a list of Twitter shorthand that includes BTDTGTTSAWIO (“been there, done that, got the T-shirt and wore it out”), IITYWTMWYBMAD (“if I tell you what this means will you buy me a drink?”), and PMYHMFSWGAD (“pardon me, you have mistaken me for someone who gives a damn”).

TL;DR: Someone’s been seriously messing with the FBI.

In that spirit, we note that they missed these important, commonly used, definitely real Twitter expressions.

ROFLMAOADAIED: Rolling on the floor laughing my ass off and detonating an improvised explosive device

IADMACTAAGI: I am definitely making a credible threat against a government institution

0B)>: Despite looking like the Unabomber, I am a well-intentioned and law-abiding person

IANALBIAANAPOIFFI: I am not a lawyer, but I am also not a person of interest for federal investigations

IITYWTMWYBMAHPOF: If I tell you what this means will you buy me a hundred pounds of fertilizer?

NOTALLMEN: I have unexamined violent tendencies

UASTCTCTBUBTFBIHHS: Using a secret Twitter code too clever to be understood by the Federal Bureau of Investigations, ha ha, suckers

NSFWUYLMAITM: Not safe for work unless you, like me, are in the Mafia

TBDCTTATEL: Too busy doing crimes to type all these extra letters

Photo via SeemingLee/Flickr (CC BY 2.0)