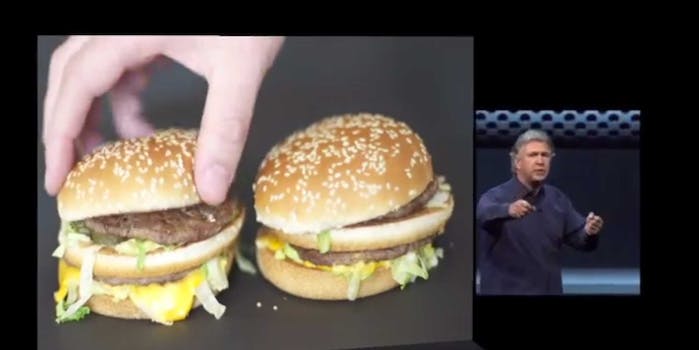 The most drool-worthy Mac Apple’s ever made

This is not the Mac you're looking for.

This is not the Mac you’re looking for.

Apple’s senior vice president of worldwide marketing, Phil Schiller, introduced the world to the newest version of the Mac Pro at its Worldwide Developers Conference on Monday. It’s supposed to boost power and double performance of the last model.

It didn’t seem possible, but Schiller also revealed another Mac that day:

Schiller’s faithful audience looks on in amazement as he introduces them to the Big Mac X, the newest version of the seemingly classic McDonald’s hamburger.

This time the Mac is “built to run a new unified thermal core.” It may sound fancy—even cool, if you take Schiller’s word for it—but he’s just referring to the pickles.

Like its similarly named counterpart, you can add external expansion to the model. The Mac may seem perfect now as it is, but once you add on the toppings and condiments, it can run and taste in ways you never imagined. Just ask anyone who’s ever been to Hoagie Haven or the Rutgers grease trucks.

“It is a Mac unlike any we’ve ever made,” Schiller said as he looked at footage comparing the two generations of Macs. They appear similar on the outside, but the inner workings couldn’t be more different.

Mac fans are already drooling for this new creation, even though it will be months before it leaves its American fryer.