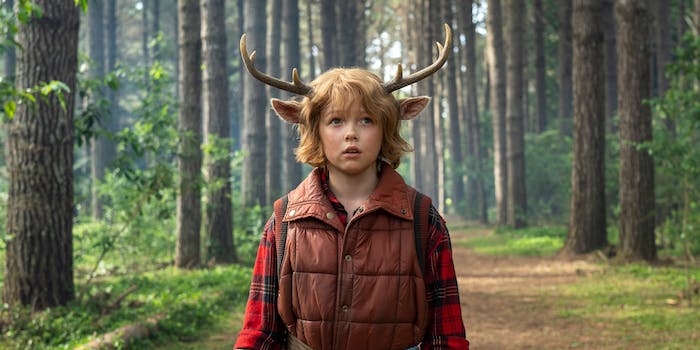 Adapted from the comic by Jeff Lemire, Sweet Tooth offers a kid-friendly view of some familiar post-apocalyptic ideas. Our protagonist, the 10-year-old Gus (Christian Convery) is a deer/human hybrid, born among a generation of kids with animal characteristics. In practice, this means he has enhanced senses and adorable little twitchy ears, but it also makes him a pariah. These hybrid babies were born during a catastrophic pandemic, and many humans blame them for the collapse of society. Gus only survived thanks to his paranoid father (Will Forte), who raised him alone in a secluded forest.

As is always the case in this kind of story, something forces Gus to leave the safety of home and embark on a quest. That’s where his reluctant ally Jeppard (Nonso Anozie) comes in. A gruff man with a violent past, cajoled into protecting this annoyingly helpless kid. Gus’s sweet, sheltered naivete is an amusing foil for Jeppard’s cynical attitude, offering a similar dynamic to The Mandalorian. The trope of dangerous men being brought out of their shell by quasi-fatherhood is not a particular favorite of mine (why no moms?), but it’s a popular formula and Sweet Tooth carries it off very well, balancing Gus’s optimistic sense of wonder with Jeppard’s more mature personal struggles.

While Gus’s adventures drive the main plot, this is actually an ensemble show. Elsewhere we see other sides of post-apocalyptic society, including a woman (Dania Ramirez) who finds a new family and sense of purpose after the pandemic, and a doctor (Adeel Akhtar) who wants to find a cure for the original disease.

Interestingly, showrunner Jim Mickle (Hap and Leonard) adapted Sweet Tooth before Covid-19—although filming did take place in 2020. Some characters wear masks when they’re afraid of infection, but the story generally steers clear of direct references to our own real-life pandemic. This is, I think, a smart choice. Instead, Sweet Tooth introduces us to a population traumatized by loss (albeit in a family-friendly manner), where certain communities remain deeply afraid of the disease’s return. Bursting with curiosity, Gus is an ideal point-of-view character to explore this complicated world.

Sweet Tooth‘s colorful palette and bold costumes are a breath of fresh air compared to the murky undertones in so many sci-fi/fantasy shows. Dark themes lurk beneath the surface, but the story is carefully crafted to be suitable for Gus’s 10-year-old contemporaries. While violence and death are central to the story, the camera doesn’t linger on blood or pain. Gus’s trusting, go-getter attitude is always there to buoy things up, even as the story grapples with heavy moral questions. It is, however, interesting to see the way American survivalism permeates the genre, even in an upbeat show.

In Western media, the archetypal post-apocalyptic story features a grim hero (usually a man) struggling to survive in a wasteland of warring gangs and desperate cruelty. It relies on the assumption that when faced with societal collapse, people will hunker down and defend themselves with guns while selfish, violent assholes seize control. Bigger settlements do exist in Sweet Tooth, and the “good” characters are marked out by their beautiful leafy gardens, but they still live in fear of random attacks and an oppressive regime led by someone named General Abbot (Neil Sandilands).

As Gus’s protector, Jeppard is your classic “good guy with a gun,” even when he’s not literally wielding a gun. His redemption arc is contingent on his ability to do violence, battling the ever-present threat of evil men trying to hunt Gus down. With its cottagecore aesthetic and a series of friendly guest characters, Sweet Tooth obviously has a warmer view of humanity than something like Children of Men. However, it still feels rooted in a colonial view of America, including its attitude to the post-apocalyptic landscape. It’s a 21st-century reboot of Old West myths about America as an “unspoiled” paradise, ready for homesteaders to settle down and thrive.

We’re offered a nuanced range of worldviews from the people Gus meets on his journey. Are hybrids the end of humankind, or a new beginning? Was the pandemic a divine punishment from Mother Earth, or simply a tragic fluke? But among all these questions, the show’s visuals suggest a more direct message. It’s all about natural beauty flourishing amid humanity’s demise, presenting an idyllic view of American survivalism. The forests are lush, the cities are overgrown, and it’s possible for small families to support themselves with subsistence farming—although they live in fear of violent outsiders. It reminded me of the conservative undercurrent in A Quiet Place, where mommy makes pickles and daddy protects the farm from alien attacks. Rarely do we see stories that focus on larger communities coming together to help each other out.

This is less a direct criticism of Sweet Tooth itself, and more an observation about what kind of post-apocalyptic stories we see in mainstream entertainment. Sweet Tooth is, by and large, a charming show anchored by a lovable protagonist. Making good use of its extensive budget, it works equally well for kids and adult audiences, adding a heartwarming and whimsical tone to a typically grim genre.