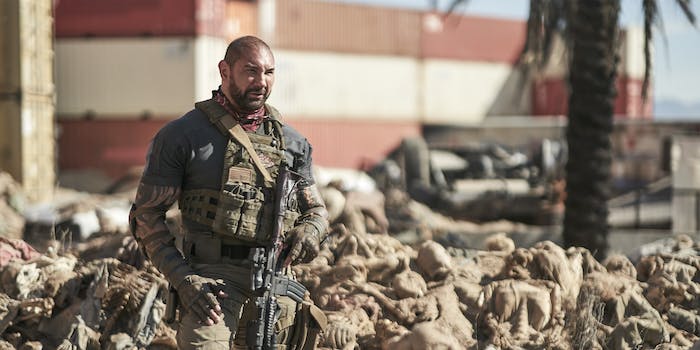 This high-octane zombie heist movie is a hell of a lot of fun.

Army of the Dead tells us exactly what to expect within its first ten minutes. As a zombie outbreak hits Nevada, Elvis impersonators and scantily-clad showgirls rip each other apart to the strains of “Viva Las Vegas.” This sets the tone for a balls-to-the-wall action thriller with a healthy sense of its own absurdity. A heist movie featuring an undead tiger, a bikini-clad zombie queen, and an unabashedly absurd premise. What kind of person tries to rob a zombie-infested casino? A Zack Snyder protagonist, that’s who.

Army of the Dead

Dave Bautista stars as Scott Ward, a mercenary hired to break into Las Vegas (a walled-off disaster zone) and steal $200 million from a casino vault. In case this plan wasn’t dangerous enough, Scott and his team must contend with a ticking timebomb. In 24 hours, the government will nuke the city and wipe those zombies off the face of the earth.

Like all good heist movies, Army of the Dead wastes no time in introducing a quirky team of specialized characters. Bautista—an underrated dramatic actor as well as a hulking action star—plays to type as a classic Sad Dad, hoping to win back his estranged daughter (Ella Purnell). Then we have an extensive international cast including Maria Cruz playing a mechanic, Omari Hardwick as a circular saw-toting philosopher, Matthias Schweighöfer as an eccentric safecracker, Raúl Castillo as a zombie-killing YouTube star, and Nora Arnezeder as their guide through the perilous ruins of Las Vegas. Tig Notaro was CGI’d in at the last moment, replacing Chris D’Elia after a sexual misconduct scandal. If only more Hollywood blockbusters would replace shitty men with wisecracking lesbians!

Co-written by Snyder, Shay Hatten, and Joby Harold, this film steers clear of Snyder’s more divisive habits: sexism, maudlin slow-mo, grim masculinity. (I was amused to note, however, that Snyder’s zombies are just as superhumanly muscular as his living heroes.) Instead, Army of the Dead ramps up Snyder’s sense of humor, offering a satisfying range of punchy, charismatic characters. By the law of zombie movies, we know that many of them won’t live to see the end. But Snyder does a good job of making us root for their survival—aside from the intentionally hateable assholes like Theo Rossi’s abusive refugee camp guard. (Love him! What a slimeball!)

Netflix has poured a lot of money into action movies with A-list stars, but most of them are utterly forgettable. Films like Extraction and Project Power earn middling reviews and attract easy clicks on the Netflix landing page, but make zero impact on the public consciousness. They feel like puzzlingly expensive straight-to-video throwaways, whereas Army of the Dead—which will also receive a theatrical release—is a bona fide blockbuster.

Put simply, Army of the Dead is a hell of a lot of fun. It features a diverse and memorable cast, echoing crowd-pleasers like the Fast and Furious franchise. It’s gory and violent without feeling unpleasantly exploitative. And while the premise is very silly, it also satirizes the desperate measures that people will take for a big payday. Obviously, this isn’t exactly a subversive addition to the zombie genre, but was anyone really expecting that? The worst I can say for Army of the Dead is that the 148-minute runtime lags in the middle, and Dave Bautista’s father/daughter subplot is a little too hokey. Otherwise, it’s an ideal kind of action flick to kick off the summer. As long as you’re okay with a few exploding heads, that is.