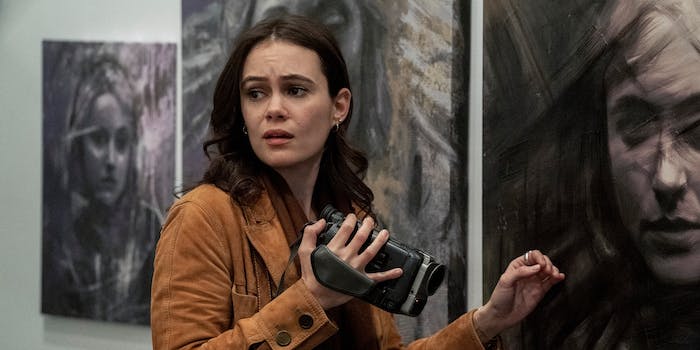 Adapted from a mystery/horror podcast, this new show explores a collection of creepy videotapes from the 1990s.

Archive 81’s podcast origins are obvious from the get-go, utilizing a popular storytelling technique for mystery/horror serials. Riffing on the found footage genre, the protagonist combs through some creepy audio tapes (or in the case of a screen adaptation, videos), uncovering dark secrets as they go.

RELEASE DATE: Jan. 14, 2022
CREATOR: Rebecca Sonnenshine
STREAMING: Netflix
Focusing on an archivist restoring some creepy videotapes from the 1990s, Archive 81 is an intriguing concept for fans of occult horror—but the story is restricted by its found footage format.

Film archivist Dan Turner (Mamoudou Athie) is hired by an enigmatic business tycoon (Martin Donovan) to restore a collection of camcorder tapes from the 1990s. Filmed by a young woman named Melody Pendras (Dina Shihabi), the footage begins as a sociological study, interviewing the inhabitants of an apartment building in New York. But these interviews are the prologue to a chilling mystery because the Visser Apartments burned down shortly after Melody moved in. No survivors were found.

If that wasn’t creepy enough, Dan’s new workplace is a nightmare. His wealthy benefactor insists that he restore the tapes in a secluded location, moving Dan into an empty house in the middle of nowhere. Ominously, he promises Dan that if he experiences a mental health crisis, there are medical experts on call 24/7.

Half of Archive 81′s story unfolds with Dan in the present day, while the other half is told through Melody’s footage. She soon suspects that there’s something weird going on in the Visser Building, signaled by the intense eccentricity of her new neighbors and the eerie noises she hears in the walls. (Geoff Barrow and Ben Salisbury, the composers behind the atmospheric music of Annihilation, provide a very sinister score.)

Drawing inspiration from 20th-century occultism, paranormal phenomena, and investigatory podcasts like Serial, Archive 81 shares a lot of DNA with audio dramas like The Black Tapes, Limetown (also adapted for TV), and The Magnus Archives. It’s a popular subgenre, but this adaptation suffers from sticking too close to the original format.

Dan spends far too much time watching and reacting to video footage; an uphill struggle for a lead actor. Meanwhile, Melody has to carry her camcorder in virtually every scene, because we’re only meant to see things she personally filmed. Several other characters also record helpful clues for Dan to discover, straining credulity in an era before smartphones. By episode five or six, Dan’s investigation begins to feel like a point-and-click videogame, relying on a constant stream of environmental storytelling as he watches new video clips, discovers hidden rooms in his house, and so on. When further exposition is required, his loyal BFF Mark (Matt McGorry) invariably phones up with a fresh clue: Another amusing fictional conceit, because what kind of millennial always calls instead of sending a text?

Archive 81 may actually work better if you’re not familiar with this style of podcast. Format problems aside, it’s better paced than most Netflix shows, combining mystery thriller cliffhangers with some effective horror direction. There’s also a strong supporting cast among the inhabitants of the Visser Building, and a finale that wraps things up while also making you hope for season 2. If that next season does happen, hopefully, they’ll find a way to uncouple the plot from those videotapes, which are sometimes more of a bug than a feature.