We now have reason to doubt every pearl of wisdom doled out by astrophysicist Neil deGrasse Tyson on Twitter.

Would asteroid DA14 really leave a crater the size of Monaco if it collided with the Earth’s surface? Do humans really radiate 100 watts of energy in the infrared? Did dinosaurs really predate flowers in our planet’s evolutionary timeline?

We now have reason to doubt every pearl of wisdom doled out by astrophysicist Neil deGrasse Tyson on Twitter.

Recently, Tyson got a little media attention after calculating the weight of Thor’s hammer, Mjölnir, as being more than the gross tonnage of 300 billion elephants. But one researcher from North Carolina State University thinks the Pluto-killing, Daily Show–schmoozing science rock star made a crucial error in his calculations. 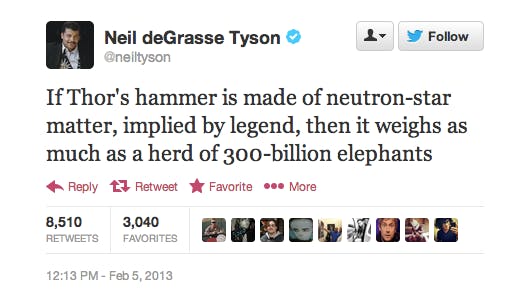 Although the math behind Tyson’s Tweet is solid, Suveen Mathaudhu, an adjunct materials science professor at NC State and fervent comic book enthusiast, says Tyson got the mythology of Thor wrong. Tyson’s calculations are based on the idea that Mjölnir is “made of neutron-star matter,” which Mathaudhu said simply isn’t the case.

At which point the comic book and scientific communities each chimed in with a collective “oh, snap!”

Mathaudhu backed up his claim with documentary evidence, specifically a 1991 Mjölnir trading card that explicitly states the hammer’s weight: 42.3 pounds. Using the dimensions and weight described on the card, Mathaudhu estimates Mjölnir’s density at roughly 2.13 grams per cubic centimeter, which would make Uru lighter than aluminum.

But if that’s the case, how is Mjölnir such an effective weapon? Mathaudhu has a theory about that, too.

“Perhaps Uru is the ‘holy grail’ of high-pressure physics: a form of metallic hydrogen,” he said. “Some predictions of the density of metallic hydrogen fall into this range, it requires extreme conditions to form, and could be a tremendous energy source. It’s thought to be present at the core of planets, such as Jupiter, and at the core of suns—which are stars, after all.”

Tyson has not responded to this counter-argument, nor has he returned the Daily Dot’s eager, fan-boyish request for comment. As for Mathaudhu, there is no indication that he is working to get Pluto reinstated as a planet.