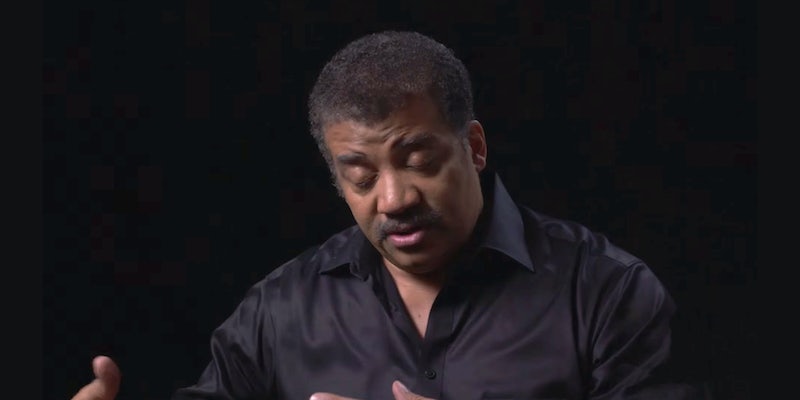 First it was this widely–panned assertion, which Tyson still hasn’t deleted, despite a slew of articles correcting him:

If there were ever a species for whom sex hurt, it surely went extinct long ago.

And now it’s Rationalia, Tyson’s theoretical, virtual nation that only has one rule:

Earth needs a virtual country: #Rationalia, with a one-line Constitution: All policy shall be based on the weight of evidence

Hey Neil, how many people would have to roll their eyes at the same time to generate a sound detectable by the human ear? (Don’t literally answer that.)

Where have I heard that before, Neil? pic.twitter.com/OzOp1H1kMZ

Tyson, a hero to many for valid reasons—making science cool to a new generation of kids, hosting Cosmos—is traipsing into Richard Dawkins territory here. At one time, Dawkins was a respected scientist, but his career change to “old man yelling about Muslims on Twitter dot com” didn’t do him any favors.

Dawkins, by the way, has already declared himself a Citizen of Rationalia:

Are you a citizen of #Rationalia ? pic.twitter.com/wot8pW2Baj

Not to say Tyson’s anywhere near that bad, just that he’s more effective at pointing out the physics errors in movies and advocating for vaccines and GMOs than he is at political philosophy. He’d never let an expert in that field mouth off about astrophysics, yet he’s got the magic solution to the world’s governmental woes. Right.

Anyway, Rationalia is bad and naïve and basically ignores the entire history of governments and political philosophy. So it’s got that going for it.

I like Neil deGrasse Tyson a lot but holy shit I would not want to live in #Rationalia. Not the least because it's also #NaiveEpistemologia.

When governments produce bullshit, it’s often not because they fail to make decisions based on evidence, it’s because the evidence incentivizes different factions to favor opposing outcomes and maneuver accordingly.

UKIP wasn’t blind to the evidence that leaving the European Union would damage Britain’s economy. The party just hates foreigners more than it loves financial stability for working people.

Republican lawmakers (mostly) aren’t blind to the evidence regarding global warming, it’s just more profitable and politically expedient for them to reject it.

Reasonable people can agree: These are horrible motivations and horrible outcomes. But they’re not irrational, per se.

In honor of #HeterosexualPrideDay, in red are the countries where it's illegal to be heterosexual. #Rationalia pic.twitter.com/3CkfT6BZX3

it’s called #Rationalia now get with the program https://t.co/3nGbjAPArj

i will build a giant locker and make #Rationalia pay for it, and then also shove them into it

Voters may ignore evidence, refuse to accept it, or have it maliciously withheld from them. But most actors in government don’t ignore evidence, they just act on it in what they think is their own self-interest. And this is where we have to hand things over from astrophysicists to philosophers, who have written volumes upon volumes trying to define exactly what “self-interest” is.

But who’s the ultimate arbiter of “self-interest?” We’re looking for some objective position from which to view what’s good for us, but no such position can be found: We’re all in this universe—or multiverse or whatever, Neil—together, and all subject to the same physical laws. Even God (if Tyson, Dawkins et al believed in one) would run into the same problem: If God decides what’s good, who decides whether God’s decisions are good? It’s just turtles all the way down.

Or, in the case of Rationalia, dudes all the way down.

#Rationalia has a lot of men https://t.co/9i3kynBogS

— the supreme court will destroy everything we want (@SeanMcElwee) June 29, 2016

So we’re left on our own to decide what’s in our interest, and sometimes (often, even) we make decisions that others see as dumb and bad.

What a crazy world, where people can view the same evidence and come to completely different conclusions about which goals to pursue and what action is required! There should probably be some system wherein we determine what the majority of people in a nation think about these things.

that's not a real country actually, surprised you didn't know that

It’s tempting for scientists—or scientist wannabes with anime avatars—to pretend to have access to some rational, objective perspective. (Dawkins, in particular, loves to do this.) They’re right that the combination of evidence-gathering and the scientific method are legitimately the best tools we’ve got for understanding the world around us. But often they argue, “I’ve looked at the evidence and you have not, therefore I’m correct on this point,” when the truth is that both sides have looked at the evidence, but the Dawkinses believe only they have drawn the proper conclusion.

It’s certainly admirable to attempt to boil down government to one uncontroversial principle that fits in a tweet, but it’s also arrogant to ignore that political scientists have struggled with that project for centuries. And the result, the “evidence,” if you will, is that it just doesn’t work.