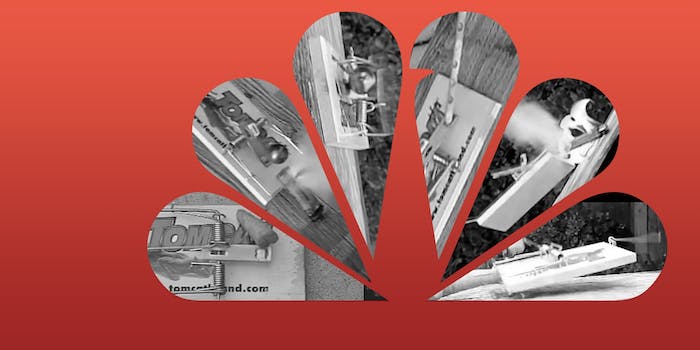 NBC used a YouTube video without its creator’s permission

"If NBC would have asked to use my videos, I  would have denied usage since I wouldn’t want to be associated with their story," video creator Jeff Heeszel said.

Dateline NBC has been accused of stealing original YouTube content and featuring it on one of its segments without permission.

The two-and-a-half-minute slow-motion clip features a rat trap being set off by a variety of different objects. It was uploaded to YouTube on Jan. 25, 2010.

The video found its way onto a July 18 Dateline segment on an explosion on a farm in Colusa County, Calif., that killed one person. NBC claims that a link to Heeszel’s video was found on the computer of a suspect.

“The interviewer of the show was surprised there were rat trap videos on YouTube and that my video had been viewed so many times,” Heeszel told me. “Then they showed more examples of rat trap videos,  showing two or three of my other videos I have filmed.”

Each video NBC showed had no mention of Heeszel or his YouTube page. NBC also stripped each video of Taofledermaus’s watermark.

The video below features Dateline’s report along with Heeszel’s clip.

At the time when NBC ran the segment, Heeszel was on vacation. He figured out what had happened after he started getting outraged YouTube messages on his rat trap video claiming he was at fault for the death of the man “because the person who did it used my video as instruction to build the bomb triggering mechanism.”

“I have had TV producers contact me for usage rights on my videos in the past, and I have had my videos on Discovery’s Sons of Guns and Science Channel’s [Outrageous] Acts of Science,” Heeszel added. “They’ve always contacted me, and I have submitted release forms so they could use it. If NBC would have asked to use my videos, I would have denied usage since I wouldn’t want to be associated with their story.”

While a legal argument can be made for using content from social media without express permission, NBC’s case for fair use seems pretty weak in this situation. Because NBC stripped Heeszel’s video of the watermark, failed to reference or show his YouTube page, and did not embed the clip, the network did not fairly use the video, according to fair use guidelines on Auraria or 3PlayMedia. NBC could argue that because the clips were used as part of a news segment, they were used fairly according to YouTube’s own guidelines. Heeszel’s copyright appears to have been violated because NBC did not ask for his permission to use the video and profited from it by airing it on a television program that features commercial advertising.

This is the second time this week a YouTube user has run into copyright issues.

Popular beauty vlogger Michelle Phan was sued by Ultra Records and Ultra International Music Publishing LLC Sunday for using licensed music in her videos. Phan claims she had permission to use the music while Ultra believes it’s entitled to $150,000 per infringement.