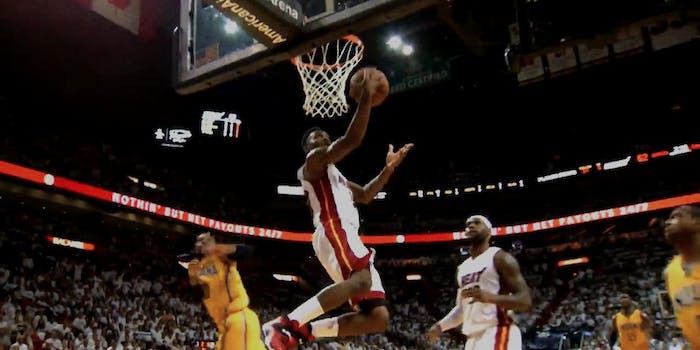 The superfan behind the greatest NBA commercial remix of 2014

The NBA's "BIG" marketing campaign was the greatest thing since  “Where Amazing Happens” and needs to be brought back.

A great commercial can be a brands greatest gift and curse, as the NBA learned in 2008.

The marketing campaign was called “Where Amazing Happens,” a collection of stunning photo highlights punctuated by statistics, powerful platitudes, and a gentle piano riff.

The series combined the greatest parts of the NBA, its players and their talent, in the simplest way. But by 2012, “Where Amazing Happens” was stale and the advertising wizards at Goodby, Silverstein & Partners had to reach into their bag of tricks for a new message.

The result was “BIG”: slow motion video clips of the NBA greatest players with a barrage of text on top.

“We like to refresh the brand every five years or so,”  the NBA’s Danny Meiseles said in January 2012. “The ‘Big’ campaign is a simple message about our game and where our game is. We felt it was a way to speak about our game in a different way. In trying to figure out where we wanted our brand to go, we kept coming back to ‘Big.’”

Despite the warm reception, “BIG” was scrapped following the 2013 season. So far, Goodby, Silverstein & Partners has yet to fill this void, leaving fans to their own creative devices.

A search through Reddit’s r/NBA turns up more than a half dozen fanmade “BIG” commercials focusing on the Miami Heat’s LeBron James, the Chicago Bulls’s Kirk Hinrich, the Boston Celtics’s Paul Pierce, and the Los Angeles Lakers’s Kobe Bryant.

The latest remix comes from Corey Estimbo (firewaffle), 28, an r/nba subscriber and server from Houston, TX.

After two weeks of compiling the best footage from this year’s NBA playoffs, Estimbo whipped up a minute-long commercial that redditors have called “amazing” and the “best fan made one of these I’ve seen.”

“I wanted to make another video like my Vince Carter one, but there weren’t many big moments captured by the Phantom camera [a slow-motion camera] in the second round,” Estimbo told me.

“So I started compiling clips to use. I would take a few minutes a day to comb through the NBA YouTube channel for clips or shots I liked and I would download them. After a week or so, I picked a song and started setting clips to the music. These were mostly placeholders and I would replace clips as I found better ones or newer ones were made available.”

Check out Estimbo’s video below and try not to get pumped for the finals featuring the Miami Heat and San Antonio Spurs starting Thursday.