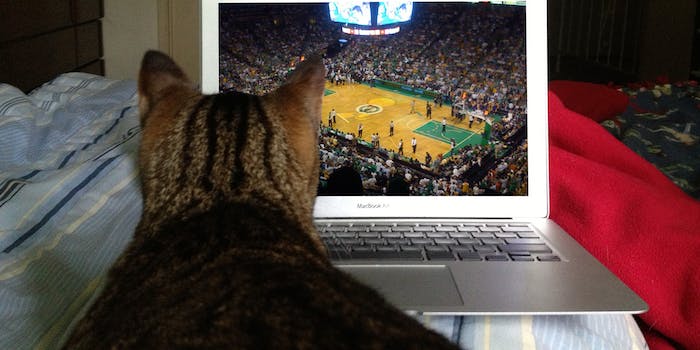 The genius behind NBA Catwatch details his meticulous process.

Utah Jazz center Rudy Gobert is not a player you notice if you’re watching the NBA. Gobert gives you about eight points and nine rebounds a game. The 23-year-old Frenchman quietly entered the league two years ago, and he plays in maybe the lowest-profile market in sports.

To the analytics crowd, however, he’s an absolute darling. That’s because these particularly nerdy fans go inside the numbers—the digits boiled down by detailed algorithmic equations that reveal Gobert to be an elite defensive player. He’s the kind of force who impacts an opposing team’s entire offense just by being on the court.

Analytics—think Moneyball for the hardwood—has taken the NBA by storm during the past decade, and its popularization has led to teams exploring all sorts of proprietary data and statistical models. Everything in the sport is now recorded on the off chance it might lead to an edge.

For example, one fan found a glaring statistical gap surrounding the NBA. Now a dedicated legion of followers are trying to fill in the blanks. But unlike most data used to determine the value of a player, this information cannot be gleaned through on-court performance. It has to be discovered elsewhere, which is why last month, Gobert woke up with dozens of variations on the same question in his Twitter mentions: “Do you have a cat?”

So i wake up and this is what i see…and thats only a few of them lol. #whatisgoingon https://t.co/Ch8nYxcXE4 pic.twitter.com/fg37zdzlCC

The question came primarily from the fervent followers of the creator of the NBA’s newest statistical model, NBA Catwatch. While most basketball analytics consist of complex formulas, this one is a simple yes-or-no question.

“The idea of an NBA cat census was a joke at first,” the creator of NBA Catwatch, who requested to be identified only as “A.”, told the Daily Dot. “But afterwards, I’d be watching a basketball game and find myself wondering if any of those players really did own cats. So I started digging around online.”

Independent sports publication the Classical once suggested it would attempt to record all of the cat-owning players in the NBA, but A. wrote on his website, “I don’t think they even tried.”

@OKSOWHATNOW We will try to make the census of cat-owning NBA players happen.

“I’m happy to take whatever credit I can for that account existing, because I’m extremely glad it exists,” the Classical’s cofounder and editor David Roth told the Daily Dot. Roth suggested the original tweet was the work of the site’s editor-in-chief Nathaniel Friedman, but Friedman did not respond for comment. (Full disclosure: I have written for the Classical.)

“It’s still pretty recent that in America we have so much access to other people’s lives, and we’re comfortable on Instagram posting photos of the inside of our houses, or sharing our exact location with millions of strangers,” A. said. “We can learn so much about other people without ever meeting them, so it seemed like [it] shouldn’t be that hard to learn if a person has a cat. Especially since if you have a cat you have to take photos of it and post them on the Internet all the time. So the cat/NBA intersection seemed like a good place to setup shop.”

While the NBA has the smallest amount of players of the major American sports—30 teams, each with 15 players on the rosters, with some fluctuating between the pro ranks and the association’s developmental league—confirming the status of cat ownership for each player takes time. It doesn’t help that 60 new players just got added to the league through the NBA draft.

Followers of the @NBACatwatch Twitter account can see the research take place in real time. It is a surprisingly thorough process for A.:“I do everything I can to actually confirm whether a player owns a cat with them, a contact, or an actual IRL journalist.”

Accuracy is important to the NBA Catwatch project. “I definitely try to do a good job with the project, and be accurate with my news, or whatever you would call the information,” A. said. “I’m serious about doing a good job documenting NBA cat ownership.”

The effort has generated a following of equally curious roundball fans who are dedicated to helping discover players with an affinity toward felines. Dubbed “#NBACatwatchers,” the group lives to gather cat-related information.

“A lot of people on Twitter send me tips, or tweet players for me,” A. said. “That’s been really helpful, because it’s more people able to scroll through thousands of Instagrams looking for signs of a cat.”

During the research process, A. regularly tweets at players to ask about cats. Unsurprisingly, replies are rare. Except for this one time.

“Deshawn Sims is the only player to have ever replied to me,” A. said. “He told me that he is terrified of cats.”

A. has also attempted to contact teams, but has found no leads in that regard. “Reaching out to teams hasn’t been successful yet but I understand because whose job would it be to ask players about their cat ownership status so some website can post about it?”

The NBA could not be reached for Catwatch-related comment.

“It is not actually important for people to know which NBA players are cat owners. Obviously. I’m aware of that.”

A. said his project has seen the most success when speaking with relatives and friends of players anyway. While Gobert was the recipient of a bombardment of cat questions, the young center did not provide an actual answer. Most NBA players are like Gobert: still in cat purgatory, with information on ownership unclear.

So far there are nine confirmed cat owners in the NBA, according to A.’s findings. Fittingly, they are labeled “Cat Owners” in the NBA Catwatch database. Six players are designated as “NBA Cat People,” a class reserved for players who at one point were in possession of a cat but whose ownership status is unconfirmed. Six other players have been grouped as “Known Cat Fearers.” Those are the players who not only don’t have a cat, but genuinely do not care for the animal.

One of the most recent to join the ranks of cat owners is Philadelphia 76ers forward Furkan Aldemir. (If that name sounds unfamiliar, it’s because the 76ers roster is made up exclusively of players generated by NBA 2K15.)

The reporting of Aldemir’s cat is the perfect encapsulation of the NBA Catwatch process. A. received a tip that the player may in fact have a cat. After trying to confirm directly with the player (in his own language, nonetheless), a beat reporter for the 76ers provided the details. The initial report had the feline’s name misspelled, and the 76ers’ reserve relayed the proper spelling via Twitter, so A. corrected the information.

The analytics crowd may look into the data collected in the NBA Catwatch project for any sort of correlation between cat ownership and a player’s abilities, but there aren’t many clear indicators.

The Cat Fearers, on paper, are a more talented squad: Zach Randolph and Carmelo Anthony are perennial top performers, Eric Bledsoe is a supremely talented guard, and Carlos Delfino and Jeff Green are capable shooters. Sims, who is currently out of the NBA and playing professional ball in a Lebanese league, skews the trend.

If there’s a red flag about the Cat Fearing squad, though, it’s that all the players on the team have an injury history that cost them the majority of at least one season in their careers.

The Cat Owners and Cat People tend to be younger players; only free-agent center Samuel Dalembert is north of 30 years old. Youth and size seem to be the defining features on the squad of cat lovers, which features twin brothers Brook and Robin Lopez.

There is also a strong foreign contingent on this side of the cat debate, with French-born Nicolas Batum, Greek-American Kosta Koufos, Russian-born Alexey Shved, Canadian Nik Stauskas, Spaniard Ricky Rubio, Furkan Aldemir of Turkey, and the Haitian-born Dalembert. The pro-cat team is a true international squad.

An interesting note of the divide between the cat haves and have nots: Koufos, owner of Mufasa, has shared frontcourt duties with known cat-fearer Randolph in Memphis for the past two seasons. Randolph told ESPN in 2013, “I’ve got a crazy phobia about cats. For some reason, I’m always thinking they’re going to scratch me. If a cat walks up, I’m going, ‘Oh no, this dude about to scratch me—I know it!’ Cats scare the hell out of me. I love animals, but I’m no cat lover. Guys usually aren’t.”

Koufos, a free agent this offseason, landed a new contract in Sacramento as a member of the Kings, replacing the recently traded Stauskas as the team’s token cat lover. There is no confirmation on whether the cat-related rift between Koufos and Randolph played any role in that move.

If there’s no statistical benefit to be extrapolated from the NBA Catwatch project, one might wonder, what’s the point? They’d be absolutely right. It’s like being the eighth seed in the Eastern Conference—it doesn’t matter in the long run.

“It is not actually important for people to know which NBA players are cat owners. Obviously. I’m aware of that,” A. said. The intention isn’t to provide a value as much as additional color to the already vibrant basketball landscape. “The online world around the NBA is so fun, and there’s so much great writing and content around the game, the teams and the players, so I don’t want to waste anyone’s time. I guess it’s important to me in that way.”

The entire project, without a doubt, borders on the ridiculous. But so does the thought of NBA players who are paid millions of dollars to play with a ball spending their time off the court with tiny, adorable cats who couldn’t care less about how famous their owners are.

A. and the #NBACatwatchers have plenty of other players to track down, and the methods of getting the information continue to expand. Gobert likely won’t be the last player to have an avalanche of cat questions in his mentions. A. has even prompted people to ask players about their cat status in person when possible.

Hey @BennyHutch while you're there, can you ask @dekker and @FSKPart3 if they have pet cats? Just if it comes up in conversation…

If A.’s project continues successfully, the next time you tune in to watch your favorite squad play, you’ll know exactly which players on the court were probably cuddling with a kitty before tipoff. That might not be information you need to know, but it’ll be information you’ll be relieved to have available. If nothing else it’ll probably make for some great taunts and arena signs.

“When I started the project I guessed there were maybe seven cats in the entire NBA, and I’ve already found more than that with so much more of the league to cover,” A. said.

For now at least, the Catwatch is on.