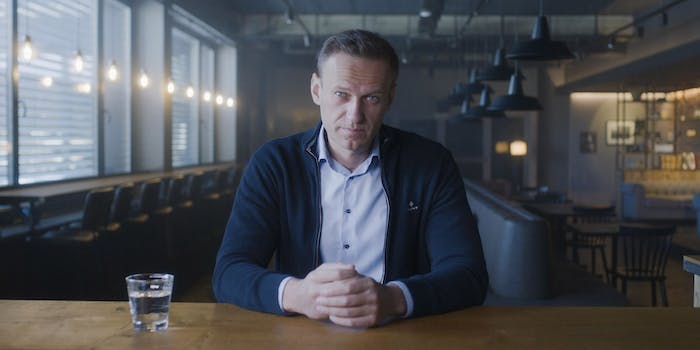 The Russian opposition leader is front and center.

Early in Navalny, director Daniel Roher (Once Were Brothers) directly asks Alexei Navalny, the Russian opposition leader and the film’s protagonist, who was recovering in Germany after an attempt on his life, what he might wish to say to the Russian people in the event he was killed. It’s a fair question: Navalny was planning to travel back to Russia, where he would almost surely face arrest (or worse) before he even left the airport. But it’s also a question that Navalny is a little irked by as he responds, “Oh come on, Daniel. No way. It’s like you’re making a movie about my death.”

RELEASE DATE: May 26, 2022
DIRECTOR: Daniel Roher
STREAMING: HBO Max
After surviving being poisoned by a chemical agent, Russian opposition leader Alexei Navalny and his team try to solve the mystery of who tried to kill him. With events often playing out as if it were some kind of espionage thriller, it’s a gripping watch, one that’s intended more to give audiences unfamiliar with Navalny context than a deep-dive into specifics.

Navalny added that he’d prefer a different kind of movie about his life than the memorial he suspected that Roher was making; he proposed a thriller instead. And over the next hour-and-a-half, Navalny more than gets his wish. Following Navalny during the months after he was poisoned with the nerve agent Novichok, Navalny chronicles the journey to track down who the people tried to kill him and the investigation into just how high up those orders went. It does so to effects so absurd that you can hardly believe what you’re seeing is real. The end result is a captivating must-watch that never lets up its pace or the tension.

If you’re a Navalny obsessive or have been following his story for months or years, I suspect that Navalny might not have much to offer beyond a surface-level examination of its protagonist. It’s an examination of Navalny as a phenomenon and what about him makes him such a threat to Russian President Vladimir Putin that Putin refuses to say his name; there’s even a supercut of Putin calling Navalny a variety of descriptors and seemingly everything under the sun but “Alexei Navalny.” Much of what we learn was already released directly by Navalny and his Anti-Corruption Foundation or reported on by several journalist organizations including the independent international collective Bellingcat and CNN; Navalny pulls back the curtain. Even the film’s most stunning moment has been readily available to watch online for more than a year.

But for the documentary’s target audience—people who might be aware of Alexei Navalny as a Putin critic and know that he was poisoned—it’s highly effective in distilling who he is. It may be a bit light on his politics apart from showing how devoted Navalny is to exposing corruption in Russia and an inquiry into Navalny’s association with the far-right and nationalists from over a decade ago. Early footage from his campaigns shows the depths of Navalny’s charm and his savviness online (he’s pretty big on TikTok) on full display, even as he’s been arrested, had his office ransacked by police, and had green paint thrown in his face. On his trip to Siberia to film footage for his campaign right before he was poisoned in August 2020, he’s almost insulted (in a bemused kind of way) about the lack of police watching his every move.

Navalny takes us through the poisoning and its aftermath, particularly as his wife Yulia fought to have Navalny transferred to a hospital in Germany so he could be properly cared for without fear that doctors might be withholding information, would cover up an assassination attempt, or try to finish the job. But things really start to pick up when Navalny, now in recovery, teams up with Bellingcat to track down who might have tried to kill him—and how.

Navalny’s big money shot, however, arrives late in the film, and it’s the kind of moment one could only hope to write. Having already proved that Navalny was poisoned, which several news organizations confirmed, the team narrowed down his would-be killers to four members of the Federal Security Service of the Russian Federation (FSB). It’s 4am, and Alexei Navalny has the contact information of the four men on the FSB team in front of him. When Navalny called the first two men, he used his real name, and they hung up. The third man hangs up when Navalny pretends to be someone else who had a connection to Putin. The fourth man, stuck at home with a case of COVID-19 (and perhaps also a foggy mind), starts explaining exactly what went wrong and why Navalny didn’t die. Sure, we can read what happened, watch one angle of it, but seeing the reactions of everyone witnessing the call is worth the price of admission.

Even when Navalny goes big, there are still moments of levity. Often, we’re reminded, whether it’s quiet moments of Navalny with his wife Yulia and his family, watching him attempt to nail the cadence of a TikTok video, or seeing him unwind by playing Call of Duty on his phone or watching Rick and Morty right before he flies into Moscow (and straight into the hands of Russian authorities), that he’s just a guy (albeit maybe just an extremely online guy). But Navalny also shows the promise of why someone like Putin would find him to be such a threat.

Navalny premiered at the 2022 Sundance Film Festival and streams on HBO Max starting May 25, 2022.