Don't count on Santa to do what needs to be done.

We’re not sure if kids feel threatened by the idea of receiving coal for Christmas anymore—it’s probably easier to take away their phone chargers when they misbehave—but one website is keeping the tradition alive.

The best part about Naughty Coal Box, which joins the ever-swelling ranks of websites that will ship weird, gross, and annoying items for you, is that it cuts out the world’s most famous middleman: Santa Claus. For just $7.99, you can send the worst person in your life a dirty hunk of carbon in the type of box more commonly reserved for expensive jewelry. (The site has a competitor in Box of Coal, whose gift boxes cost $12.95, though you can also get three coal lumps in plastic for $4.95 or burlap sackful for $9.95.) 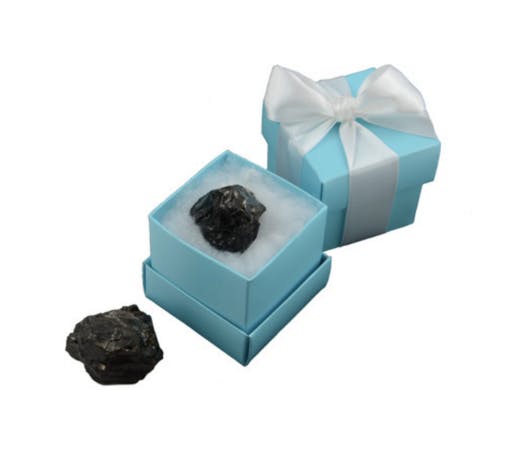 Did your boyfriend sleep with your sister? Your dad steal your weed? Have your kids been extra shitty this year? Did your boss stiff you on your bonus check? The lucky bastard that you are gifting this to probably deserves a swift kick in the ass, however, this fossilized turd will do. Christmas is the time of giving so give that special shithead in your life something to remind them just how big of a dick they are.

You also have the option of adding a little message to your package, in case the recipient is too stupid to realize how they’ve wronged you this year. But be warned, the coal takes seven business days to arrive—presumably because that’s how long it takes the elves to mine the perfect piece.

So what are you waiting for? ‘Tis the season.

Update 2:07pm CT, Dec. 2: An earlier version of this article failed to distinguish between Naughty Coal Box and Box of Coal, two online services that do pretty much the same thing; the image above was wrongly attributed to Naughty Coal Box.