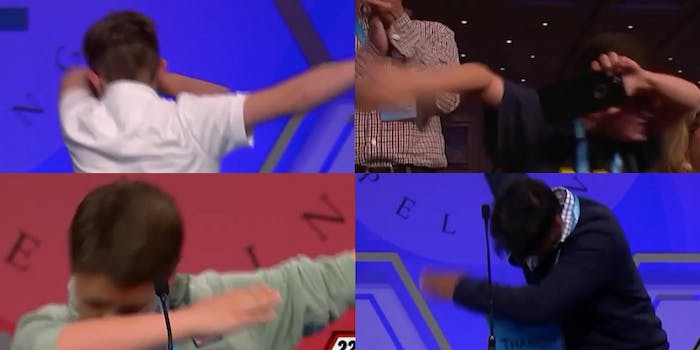 The National Spelling Bee was actually a dabbing competition

I never would’ve thought that I’d write the following sentence, but it’s 2016, and anything is possible:

Why? Well, aside from prompting a savage Twitter roast and having children spell words such as “condignly” and “nagelfluh,” the televised spectacle also doubled as a 2016 Dab Competition.

So many dabs, dude. It’s one thing to outspell a competitor, but to then dab on them with unrelenting fury? Only the strongest survive in the Scripps National Spelling Bee, and if you can’t successfully pull off a fire dab after spelling a word that sounds made-up but is actually real (seriously, how many people in a year use the word “nagelfluh”), then you don’t deserve to be at the top.

The Spelling Bee may have ended in a tie for the third year in a row—that’s just the level of skill and sportsmanship we’re dealing with—but history was made last night. May the dab forever live on and continue to turn all supposedly nerdy events into pure fire.

This spelling bee is fire.