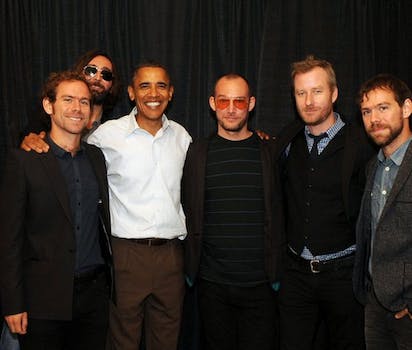 The National frontman Matt Berninger voiced his displeasure on YouTube after one of the band's songs was used by a student organization at Ohio University.

A group of Ohio University students have upset the National for posting a pro-Mitt Romney video to YouTube that featured one of the indie rock band’s songs.

The video, which has since been deleted, was put together by the Ohio University Students for Romney organization and used the Brooklyn-based band’s song “Fake Empire” as a backing track.

The group of students, however, used the song without asking the band if it was OK. Over the weekend, they found out it wasn’t.

That’s when the National frontman Matt Berninger found out about the ad, and he promptly took to YouTube to voice written displeasure with his bands’ involvement.

“Our music was used without our permission in this ad,” Berninger wrote in the video’s comments.

“The song you’re using was written about the same backward, con game policies Romney is proposing.

“We encourage all students to educate themselves about the differences between the inclusive, pro-social, compassionate, forward-thinking policies of President Obama and the self-serving politics of the neo-conservative movement and Mitt Romney.

“Every single person involved in the creation of the music you’re using is voting for President Obama.”

Group administrators took the video down on Saturday, posting a message to Facebook that explained the fracas.

“We apologize for offending ‘The National’ and their fans by using a cover/remix of the band’s melody for ‘Fake Empire,'” the group wrote. “We were attempting to reinvigorate and unite the disgruntled fans wary of supporting the President as they did with ‘Signs of Hope and Change’ with a new movement of people who believe in real recovery and reform in supporting Mitt Romney. Unfortunately we’ve learned that partisan divide exists on YouTube and in music as much as it does in Washington… We respectfully took down the video, and will repost with music representing a better future with Romney & Ryan in Washington.”