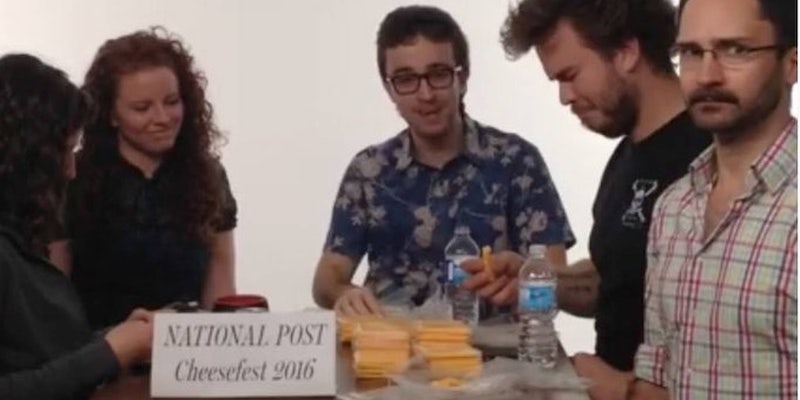 Welcome to our future.

Earlier this month, BuzzFeed set the unfortunate tone for what media outlets will be doing on Facebook Live by exploding a watermelon with rubber bands as 800,000 people watched. On Tuesday, the digital team from Canada’s National Post tried to eat 64 slices of processed cheese on Facebook Live. The view count never made it to five digits.

Unlike the watermelon stunt, Cheesefest 2016 ostensibly had a point. Reporter Victor Ferreira explained at the outset that he’d been chasing a story about an underground cheese club that had formed around a simple challenge: These human beings would attempt to eat more rubbery slices of cheese than Homer Simpson, a popular cartoon character.

As a tie-in to this strange story, and possibly a way to understand what his subjects were going through, Ferreira and coworkers attempted the challenge themselves. And, because we’re living in the post-watermelon era, they did it on Facebook Live. This sort of stunt has now been established, tentatively, as what the platform is for.

To be fair, not every experiment in making Facebook Live part of a reporter’s job has been a dismal failure. Last week, staffers from the games journalism site Polygon played the Dark Souls III drinking game on Live, and it was actually fun and enjoyable. It didn’t feel like watching an entire industry collapse on itself in a shower of cheese bits and watermelon pulp.

But game streaming is already its own, booming business, and it has a home on Twitch, the combination YouTube-ESPN of video games. Some popular streamers will probably migrate to Facebook Live—especially if Facebook pays them to do it—but that will be a win for Facebook, not a win for journalism.

And dumb stunts probably aren’t the way forward either. Teens on Vine and YouTube blow things up and eat until they’re sick, too. And they’re funnier and more experienced than most of the journalists who are about to be forced into second jobs as livestreamers.

But hey, reporters are already here, and nothing else is working, so we might as well throw food items at the wall and see what sticks. (Note to self: literally try that on Facebook Live?)

In conclusion, I expect it won’t be long before this happens for real:

Later today I’m going to throw $200 in the middle of the newsroom. Watch what unfolds! https://t.co/ZcgfXZSQe1