Champagne, cheese, and stories about your horrible ex-boyfriend.

It’s time pop the champagne, bring out the fancy cheese platters, and strap on glittery party hats. Sept. 19, 2015, marks one of the most important holidays of contemporary life: National Fuckb0i Day. While fuckbois (also commonly spelled “fuckboys” or “fuccbois”) already take too much of our time and energy, this fine fall day is especially dedicated to celebrating their awfulness.

According to the Facebook event, there were about 44,000 in attendance when the event started at the stroke of midnight, with around 7,000 unable to come and 1,300 maybes. Those maybes are just people who aren’t going to show up anyway, but that’s still a pretty spectacular turnout.

The initial date was Sept. 12, but Arthur moved it when she realized that scheduling it the day after 9/11 was maybe not the most tactful.

University of Pennsylvania student Maya Arthur created the event back in June when she was  hanging out while watching House Hunters. The initial date was Sept. 12, but Arthur moved it when she realized that scheduling it the day after 9/11 was maybe not the most tactful. But once she moved it to Sept. 19, she remembered the other important milestone takes place on that date: her mother’s birthday. This time, she just left it, figuring the coincidence wasn’t worth another shift in date.

Arthur had made joke events in the past on Facebook out of sheer entertainment—where she’d been the only one who RSVPed. But thanks to the way one person’s activity pops up on everyone else’s feed, Arthur’s friend Hope saw the event and also said she was going. That’s when the hordes of people started hitting up the Facebook page.

But just what is a fuckboi? The word has been all the rage lately, showing up in mainstream pop culture and Tumblr dashboards alike. It’s exploded in popularity, with people curious as to what exactly the term means.

Whether or not you’re familiar with the idea of a fuckboi, you have surely encountered one of these fiends at one point or another. And the word, even if it’s a mystery to you, does invoke some sort of imagery. There’s an undeniable power to it. And despite its apparent simplicity, its definition is a tangle of different meanings, dependent on who you ask.

“Personally I think fuckboi encompasses all genders. By fuckboi it’s someone who’s not reliable who doesn’t have your best interest, someone who in the long run isn’t the best person,” Arthur told the Daily Dot. “Fuckbois have this high perception of themselves but they’re unaware of their true self.”

Nicki Minaj announced during her rap in the remix of Carly Rae Jepsen’s “Tonight I’m Getting Over You” that she “ain’t fuckin’ with no fuckbois.” For those unfamiliar with the CRJ banger, it’s very much about what the song title gives away: moving on from a bae that maybe wasn’t all that bae in the long run. The rest of queen Minaj’s verse encapsulates the song’s most essential components.

Ain’t fuckin’ with no fuck boi! / Get me get me, should’ve got me then / Cause I would wear for real and you would rock pretend / Yo, can I get another dose of my oxygen / Cause I been breathin’ all this motherfuckin’ toxin in!

In that context, a fuckboi appears to be an ex that was majorly fake. The relationship was toxic. So Nicki’s understandably not fuckin’ with that no more.

“A form of shithead man, typified by the ‘what would u be doing if I were there ;)’ kind of discourse and a general lack of respect for the people he wishes he were fucking.”

When I asked a couple of my friends what fuckboi meant to them, their answers were similar but not identical. One said, “a sleazy good-for-nothing dude who doesn’t treat you right and isn’t worth one’s time.” Another friend described “a form of shithead man, typified by the ‘what would u be doing if I were there ;)’ kind of discourse and a general lack of respect for the people he wishes he were fucking.” The third person I asked responded with “Literally Zayn Malik. It really pains me to say it but here it is.” This is probably in reference of the ex-One Direction member’s treatment of ex-fiance and Little Mix’s Perrie Edwards.

But before the fuckboi made it into casual conversation among besties, the word moved from space to space. The word has a varied past, from being used in reference to prison rape or a prisoner who takes commissary items as payment for sex. It also found itself in African-American Vernacular English, where other now-ubiquitous terms—such as “bae”—originated. It’s vital to acknowledge the word’s history.

With all these varying definitions, it’s still hard to pinpoint what the word means. In Jacob Brogan’s piece for Slate about the word, he concludes his exploration with an acknowledgment of how the term “resists complete explanation. That’s what makes it powerful. Or maybe it’s the reverse: Maybe the word is too powerful to permit explanation.”

“Words change but words are still words. You can’t forget how words started and how words form when it comes from one community to the next,” Arthur said.

They say “If you build it, they come.” Well, if you create something that gets even a little bit of attention on the Internet, the trolls will come. And they have stampeded through the Facebook event’s page with various polls and comment threads that have more than over 100 replies. 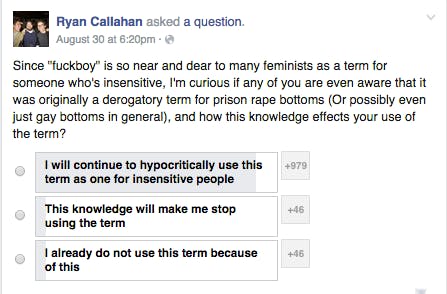 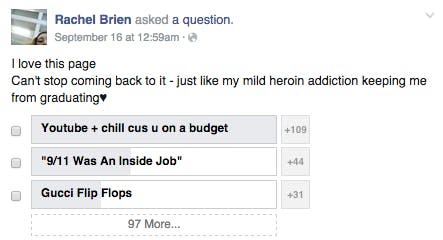 There’s even an immense argument about the word’s meaning that has just become a frenzy of comment flinging, where one online vigilante has made it a point to educate everyone on the word’s past. Meanwhile, Arthur has turned off Facebook friend requests because she just started getting a bunch of messages from, well, fuckboys.

Backlash aside, the Facebook event is still pretty hilarious. The pinned post is a link to the track “Fuckboy (SUPREME)” by Gumball Machine on SoundCloud. And per a friend’s suggestion, the event cover photo is Logan from Zoey 101—whom, for the record, Arthur doesn’t think is that big of a fuckboi. Remember, he ended up professing his love for Quinn in the end.

We’ll never be able to escape fuckbois, so we might as well party in tribute to how horrible they are. Looking forward to National Fuckboi Day 2016.