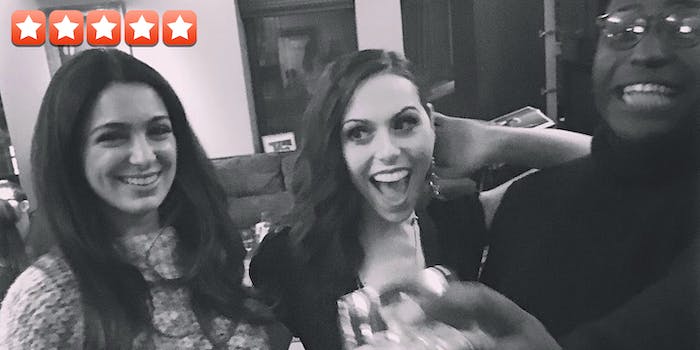 It started innocently, as most romances do.

A couple of weeks ago, Natalie Walker, a New York-based actor and writer, decided to review a handful of old dates on Yelp. But she never imagined what would blossom from this simple idea.

“I thought it would be a dumb thing that four of my friends on Twitter would see [and] be like, ‘Hahaha yes, girl!’ or a weird dumb easter egg for people who stumbled on them on Yelp.”

While Walker knew she was posting reviews that didn’t quite conform to Yelp’s guidelines, she did lay some of her own ground rules.

Like any hopeless romantic, Walker stuck to her guns and returned to the site—this time armed with a clever disguise.

While Walker’s tryst with Yelping about past romances was short-lived, she said she has no regrets. She feels good about her conquests and how she featured those she reviewed.

“I wanted to keep it fun and not be mean-spirited, so I [mostly reviewed] older dates from like five years ago. I did one for Hamilton, but that was the most sort of surrealist in tone, because it was about the cult of Hamilton and not my actual relationship.”

As for Walker’s most recent dates, although some speculated that the reviews would have a negative effect on Walker’s love life, she said that couldn’t be further from the truth.

Said Walker, “All the BroBible commenters are like, ‘Who’s gonna wanna go on a date with this ugly cunt?’ but I’m doing fine. Guys that I’ve known for a while are like, ‘Hey, do you want to get coffee sometime?’ And then there are random dudes on Twitter who @ me, [but] I’ve been seeing someone pretty consistently for the last 3 months.”

For many, that would be a happy ending. But, truth be told, Walker said she still finds herself pining for Pam.

“I think Pam might have taken some improv classes, because she really knew how to yes-and,” said Walker.

She added wistfully, “Maybe I’ll get to meet Pam. I pray that I meet Pam and that we get to recreate the final scene of Carol. That’s the next step in this story that I want.”

Our prayers are with this star-crossed couple.