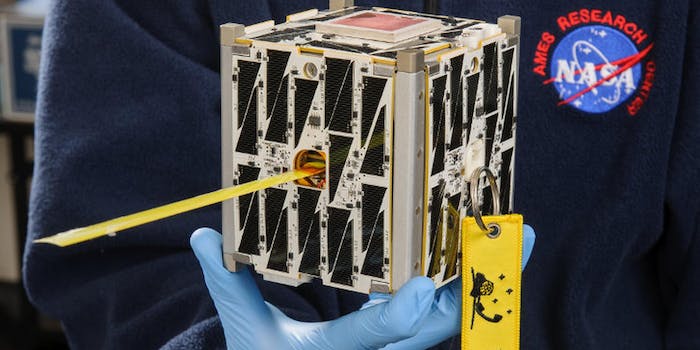 NASA is testing two-way communications technology on on ot its experimental satellites.

Ever since NASA launched a new group of tiny, phone-powered satellites into space a few weeks ago, we’ve been waiting for one of the little PhoneSats to phone home. Now, one of the nano-satellites has successfully communicated with Earth, an important test of a much-needed capability.

Engineers at NASA’s Ames Research Center are currently in the middle of testing two-way communications technology on one of the PhoneSat experimental satellites they shot into space a couple weeks ago. On Wednesday, the tiny satellite—weighing only about 2.2 pounds, or the size of 20 CDs stacked into a cube—used its S-band radio to make a call the ground monitoring station at Santa Clara University, in California, signaling to the engineers that it was ready to receive commands.

The satellite is called a PhoneSat because the satellite’s brain is basically built around a heavily modified Samsung Nexus S, running off the shelf Android software.

Two way communications are really important to NASA’s long term objective of building satellites on the cheap, because they’ll enable teams on the ground to control PhoneSat—eventually including things like navigation and instrument readings.

During the two-way radio tests, the most critical system the engineers on the ground will send commands to is the attitude control. That system uses a smartphone’s magnetometer to sense the earth’s field, creating an aligning force with magnetorquers, or printed-circuit electromagnetic coils commanded by the phone. With its attitude control functioning, the PhoneSat can align itself with Earth’s horizon, something that’s pretty useful for satellites, according to NASA engineer Jim Cockrell.

But the attitude control system uses a lot of power, so the teams on the ground want to be able to shut it on and off—hence the importance of the new two-way S-band radio.

Read the full story on Motherboard. Photo via NASA