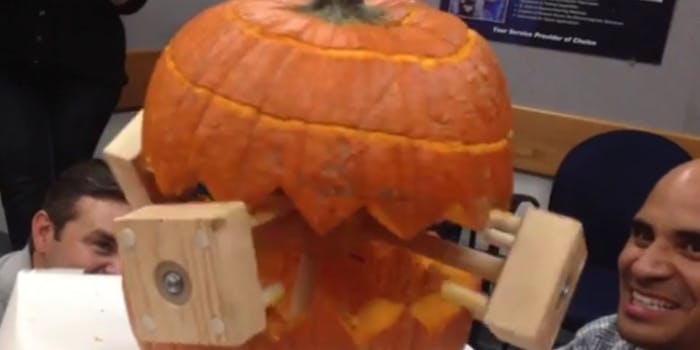 What happens when NASA engineers hold a pumpkin-carving contest

NASA puts on a challenge worthy of the agency's legacy.

NASA’s been having a tough time of it lately. The government shutdown furloughed 97 percent of its workforce; conservatives are battling to slash the agency’s funding; its shuttle program has been shuttered; and its astronauts haven’t been back to the moon since Nixon was president.

Perhaps the one bright spot amid the agency’s recent woes is its Mars Curiosity Rover, currently collecting data on the red planet and beaming it back to Earth. The rover is operated by the Jet Propulsion Laboratory. And this might explain the high spirits among JPL employees in their one-of-a-kind pumpkin-carving contest this year.

As this video shows, the workers deployed everything from lights to robotics in order to create motorized jack-o’-lanterns worthy of the agency—which, let’s not forget, regularly blasted human beings hundreds of thousands of miles, to the moon and back.