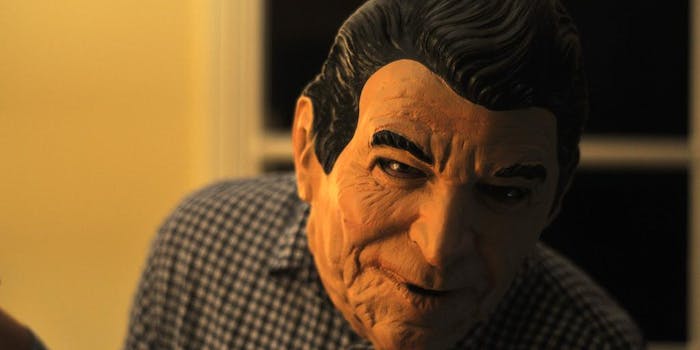 One Alabama couple faced a political terror on New Year’s Eve, and we’re not talking about Donald Trump getting elected.

A naked dude wearing nothing but a Ronald Reagan mask and sock over his wang lurked his way onto Danielle and Bart Yancey’s property on Thursday night. Bart had just taken out the trash and when he got back inside, noticed a shadow of a figure that had trespassed onto their property. That’s when Bart yelled at him and the Reagan impersonator scrammed.

Danielle, who also happened to be on Bravo’s Jersey Belle, posted footage from their home security camera of the encounter with the naked kind to Facebook.

According to AL, police responded and were unable to capture the culprit. But they did receive another call at about 11pm regarding a teenager streaking through the neighborhood in an area that youngsters hang out in.

It’s unconfirmed if this was just a prank from the neighborhood youth or if Reagan has been resurrected and is terrorizing Alabama communities.