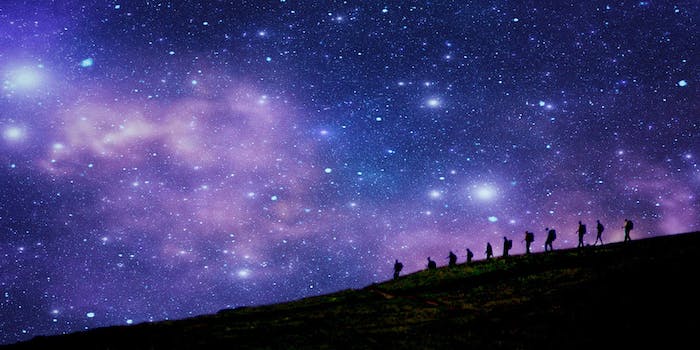 Like searching the night sky, what you see in the Myers-Briggs test depends on what you're looking for.

When you meet someone, it’s customary to ask what they do for a living or to make small talk about General Safe Topics Everyone Agrees On (e.g. weather or the unquestionable greatness of The Wire). However, I’m usually waiting for my moment to ask about their Myers-Briggs type.

It’s the perfect cocktail party question, simply because it provides a modicum of insight into someone without getting too personal. You’re not asking about their first sexual experience or eliciting a confession of their darkest secret. The MBTI offers a handy one-sheet of someone’s personality traits as documented and classified for public consumption. It’s less an indication of someone’s objective character than a handy tool to see how someone sees themselves, a measuring stick as useful as it is scientifically shallow.

For this reason, the Myers-Briggs Test has come under fire in recent weeks, following a Vox takedown of the MBTI assessment and million-dollar personality farming industry behind it. (Typical assessments cost anywhere between $15 and $40, and considering the fact that 2.5 million people take the test each year, that’s a lot of profit.) As Vox’s Joseph Stromberg argues, these tests are “completely meaningless,” citing the MBTI’s reliance on false binaries, as well as its adherence to unproven theories developed “before psychology was an empirical science,” as the University of Pennsylvania’s Adam Grant put it.

A brief history of the Myers-Briggs Test proves Stromberg’s assertions absolutely correct. The survey was developed in the 1940s, based on a lay interpretation of Jungian psychology developed by two women with no scientific background.

Katharine Cook Briggs, a Washington D.C. housewife, and her daughter, Isabel Myers, created the test as a way to encourage women to join the workforce. Based on the latest Jungian texts coming out of Europe, the pair felt that helping women find their place in potential jobs would encourage participation. According to Lillian Cunningham of the Seattle Times, the test was, thus, based on “innate character traits rather than previous professional experience, which many women did not have at the time.”

The test’s origins in the workplace would then explain its overwhelming embrace by the corporate sector and education, where Cunningham claims “10,000 companies, 2,500 colleges and universities, and 200 government agencies in the United States use the test.” According to CPP, Inc., the publishers of the official Myers-Briggs Test, 89 of the Fortune 100 companies utilize the MBTI in management. You may even find yourself filling out a version of the Myers-Briggs survey along with your job application.

For businesses, the test’s appeal is its veneer of psychological insight, the idea that the Myers-Briggs test allows you to better utilize and place employees. A common misunderstanding is that the MBTI helps predict what kinds of personalities are best for certain tasks and roles, a notion Inc.com’s Eric Sherman calls “a bit crazy.” In an email, CPP agreed, calling the use of Myers-Briggs methodology in hiring “unethical.” They explain, “People of many different types excel at the same job for different reasons. Individuals should not be pigeonholed based on their personality preferences.”

It’s the business of the Myers-Briggs Test that has proven a sticking point for critics, as the MBTI has become a $20 million a year industry based on voluntary data farming that many see as no more relevant than a BuzzFeed quiz. Jung’s own theories, including his thoughts on ESP and the collective unconscious, have long been discredited, and according to Stromberg, even Jung was an MBTI skeptic: he “warned that his personality ‘types’ were just rough tendencies he’d observed, rather than strict classifications.”

And in developing Jungian psychology into corporate dogma, Myers and Briggs played fast and loose with the facts. The test is a partial bastardization of his principles, as the Perceiving and Judging metric never even existed in Jung’s original theories.

But between the binary of the Myers-Briggs test being total crap and total enlightenment, we approach the truth of the MBTI—that total crap can be very enlightening.

For some, the Myers-Briggs is a slippery slope into Barnum Effect, people’s tendency to “fall  (become ‘suckers’) for generic personality explanations such as horoscopes and magazine self-tests as well as supposedly ‘scientific’ tests administered by an ‘expert,’” and one of the many cited strikes against the test is that because of its reliance on dichotomies, a great number of people can take the test and get a variety of answers depending on when they take it. You might find that both the ENFJ and the ISFP results sound like you. What does that make you then, schizophrenic?

The answer is that most of us are in between. Almost all attempts to classify personality are false, whether you’re trying to group all of humanity into Michael Jackson people or Prince people—or people who like Grease 2 and people who don’t. Personalities fluctuate and change not only with your mood but with phases in your life, and a Myers-Briggs result that you got when you were 15 might not sound correct at 35. That’s not an error of the system—in fact, it might be more alarming if you hadn’t changed at all in those 20 years than if you had.

I took the Myers-Briggs test for the first time a decade ago. I scored ENFP, a result I felt fit my ideal self, one that might be called “the life of the party.” In the personality description, the type was even billed as “the Journalist,” my major at the time in college. How fitting! I took it again years later, after finding out that everything I wanted to be wasn’t the person I was at all; I hated most of my friends, the people I was meeting, and the parties we went to. Being 20, an age where you’re expected to do more than your share of revelling, I thought there was something wrong with me for wanting to stay home and read. Why was I happiest when no one else was around? Why, more than anything, did I just want to be alone?

The second time around, I got “INFJ,” a type associated with prophets, mystics, presidents, and a lot of people who lost their minds. Rather than giving it a cursory glance as I had before, I actually read it, and as my brain processed the information, it felt like a plate was sliding into place; continents were being formed.

Because I was apprehensive about being labeled as an “introvert” (but I love people! I protested internally), I asked my boss what she thought of the idea. She asked me to think about when I was happiest. Was when I was with other people? Or was it when I was with myself? It’s a simplistic way to think about introversion, a highly complex notion that applies to a small percentage of the population (as most people are ambiverts, or in between), but I was forced to consider the real truth: I’d never really thought about when I was happiest, because I’d never taken the time to think about myself independently of everything I’d been told was cool and desirable. I had to deprogram.

The Myers-Briggs Test is bad at a lot of things, like predicting what jobs you’re best suited for or who you’ll fall in love with. But as Dr. Ronald E. Riggio suggests, the area in which pseudo-psychology can be very helpful is as a “tool for self-reflection,” but only “if [it’s] used as a starting point for discussing how people vary in their personalities, and emphasizing tolerance for individual differences and taking others’ perspectives.” This is why many practitioners suggest replacing the MBTI with the Big Five, a test grounded in and backed by current theories of social psychology.

But in the meantime, taking the Myers-Briggs test can be a way to not only recognize patterns and tendencies in your own behaviors but also to find a support network and a community of people who see the world like you do. Of the 16 Myers-Briggs types, INFJs are billed as among the rarest, with around 1.5 percent of the population identifying as INFJ. And with that kind of statistical uniqueness comes a great deal of loneliness, especially for a subgroup already prone to existential soul-searching and depression.

Because of this need for connection, INFJs have built one of the most active online networks of the Myers-Briggs subgroups, vastly overrepresented on social media. Among Facebook groups, INFJs are only outnumbered by INTJs, another very rare type. (According to MyersBriggs.org, INTJs account for just 2.1 percent of the entire population.) In such cases, finding that a community of people who share similar characteristics to you isn’t just revelatory. As INFJs commonly share everyday coping mechanisms and give each other life advice in Internet forums, it’s clear that it may also be a means of survival.

Pseudo-science doesn’t have to be empirically sound for it to have meaning in people’s lives. Ever since man was able to look up at the heavens and make animals out of disconnected stars, he’s attempted to make order out of universe’s expanding chaos. You might find that, over time, what you see in the night sky has changed—or maybe that you’ve changed. The observed result or the telescope itself isn’t, in the end, that important; what makes the difference is your willingness to finally look.