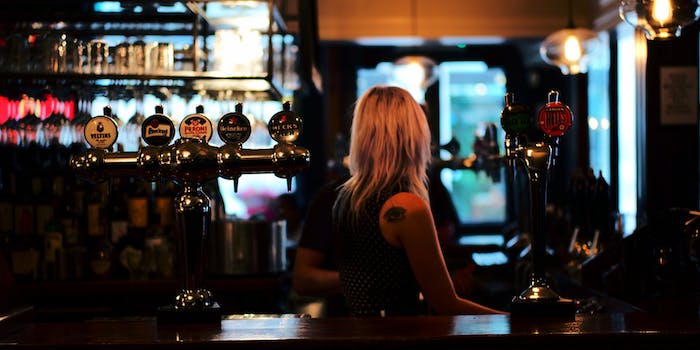 It's the sexual harassment heard around the world.

Two weeks ago I quit my bartending job. A man came into my restaurant, had a drink, and made a lewd comment to me, while he also happened to have his hand on my ass. It’s now a somewhat Internet famous event, as I posted about it on my Facebook page and the note took off.

That one little pic now has almost 19,000 likes, and near 10,000 shares. My anecdote got some press attention as well, with stories published on Jezebel, Huffington Post, NYMag.com, and even as a full-page spread in the New York Post. That article in the Post likely contributed to the attention the whole thing received, as the customer in question apparently called me a “fucking c*nt” on the phone to their reporter, claiming that he had “grabbed a lot of asses” but never mine.

To be clear, I never said he “grabbed” me (just touched me), but I can’t imagine that the reporter made the distinction over the phone. Nor would it be emphasized by various Facebookers who were tagging and attacking him in response. You see, I made the saucy, dangerous, and arguably underhanded choice to include the name of this customer when I posted about it on Facebook. I will never know whether that was a good idea, because I will never witness the full repercussions of my actions.

I shared the story in the hopes that 100 of my friends might enjoy it and relate to my struggle. I even dreamed that maybe someone would read it and learn something, and perhaps express a greater level of respect and consideration for their server the next time they sat down to eat. I never expected thousands of shares, or international press attention, and I certainly never expected to be on the phone with a journalist explaining precisely how many fingers some guy had placed on my ass one time.

I asked the NY Post— one of the first publications to contact me (and somewhat known for their sensationalizing journalistic style)—not to run the story and not to include my photo. Alas, the next day, there I was, grinning in an inset below some hilarious headline about the supposed hedge fund titan who called me a misogynistic expletive in his defense against my claims. I don’t feel great about how this has all played out, and I’m not confident that using this guy’s name was a positive choice.

That said, in hindsight I wonder if the post would have gone viral without that detail included. The mob wants an antagonist.

The customer’s comments added some serious fuel to the fire. He now perfectly fit the profile. My post was gaining so much attention that I couldn’t keep up. Every time I logged on to Facebook (which I was doing much more often than usual), I had dozens of new friend requests and countless messages, and notifications of shares and likes in abundance. I had also started to receive a few negative messages and seen some ugly commentary. If you ever want to lose faith in humanity, do some Internet comment reading. Online comment threads are where the world’s most vicious, ignorant, and attention-starved individuals go to start trouble.

I once appeared in a comedy video in which I died. (Fictionally—I’m clearly alive typing this.) The sketch went viral and out came the trolls. Certain people online got confused about whether I had actually died, failing to grasp the more basic concepts of visual fictional narrative. The only thing more bewildering than these kinds of questions were the vicious responses they received. One thread devolved into two people calling each other “retard” and “faggot” at least four times back and forth. No new debate, just horribly offensive words, all in caps, on repeat. Great job, Internet strangers! Way to dedicate your time and energy to something obviously worthwhile and productive!

So suffice it to say, this time around when I started to feel the spotlight, I decided to ignore the less constructive noise. But a few nasty and critical comments made their way through to me regardless. The press was treating me very favorably, but I still felt backlash. If I, the appointed “hero” in this particular tale, was coming under heat, just think of the abuse my customer must have been dealing with.

I made it very clear in my original post that I was sharing my story in the hopes of creating awareness and that I didn’t mean it as an attack. But that didn’t necessarily prevent anyone else from going on the offensive.

I have to admit that when I read the Post article, I was a little relieved. I had lost sleep thinking about what I’d set in motion, and the pain and hurt I’d likely inflicted. I wanted the guy to learn something and for him to potentially adjust his behavior. I didn’t want strangers outright attacking him and knew things were spiraling well out of control. So when I opened the Post article and read his defense and saw that he had called me the most offensive misogynistic expletive available, I was almost comforted by the realization that this probably wasn’t an awesome, misunderstood guy. Maybe a week of negative Internet attention would be required to help him reconsider his actions in the future.

Another interesting thing began to happen. He played the role of culprit so well—as a Gothamist article so aptly put it, straight out of “Central Casting”—he became an almost comically evil perpetrator of an unthinkable, heinous act. But when I posted initially, I had hoped to emphasize the point that this sort of thing goes on all the time. I have to assume that my post caught viral fire because so many others related to my story. Countless servers and women have customers just like him that they deal with on a daily basis. This guy might be an asshole, but he’s not alone. He’s the norm.

And frankly, it doesn’t really help to call anyone an asshole. That doesn’t prevent anything like this from happening again.

Friends, showing support, asked what I was going to do to this guy. Would I sue him? Did I have elaborate plans to make him pay? No. I have no current intentions to sue this person for sexual harassment. That would be vindictive and a headache. And furthermore, if I sued every man that sexually harassed me, I wouldn’t make it out my front door before having to serve a catcaller papers.

I think I’ve done plenty already. I’m able to sleep easy knowing that this fellow probably won’t ever tell that so-called “joke” again, and that thousands of random people on the Internet found comfort in my words. If one bartender—crying or raging secretly in a bathroom somewhere—saw my post and smiled, it would be enough.

So let this be a reminder, because I know I always need the reminder, and maybe you do, too: Please be kind to one another.

This post originally appeared on The Frisky and was reprinted with permission.