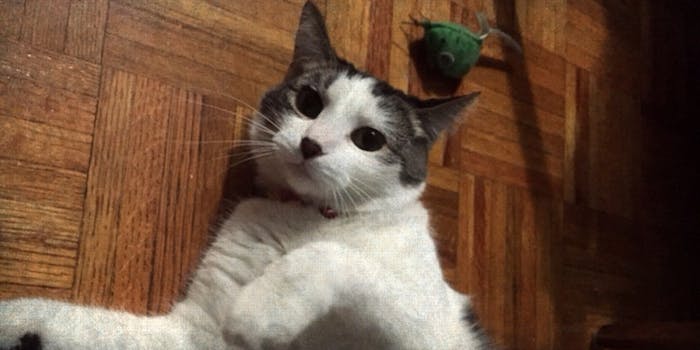 Science discovered ‘music for cats,’ and my cat hates it

My cat, Thundercat, is not the most intellectually sophisticated cat in the world. She hisses at her own reflection. She regularly confuses plates, glasses, and other breakable dining ware for toys. And I have often caught her attempting to eat her own vomit with a deeply contrite look on her face, like a glutton who orders an off-menu dessert at an all-you-can-eat buffet.

So when I read in the Atlantic that scientists had figured out that cats, like people, enjoy music, and that there was a CD that consisted solely of tracks tailored to cats’ tastes, I was skeptical that Thundercat would be able to appreciate it.

According to the article, a group of researchers collaborated with composer-producer David Teie to create tracks that matched the same frequency as cat vocalizations. When researchers tested the songs on felines, the four-legged subjects purred and rubbed their heads against the speakers.

“The domestic cat’s hearing range is far above its own vocal range; it uses this ability to hunt for some of its favorite prey,” Teie writes on his website, the aptly titled Music for Cats. “In the next phase of the development of music for cats we will introduce ultrasound music that should be a bit like sonic catnip.”

To be fair to Thundercat, she has something of a musical pedigree. I originally got her from a group of jazz musicians I went to college with, who’d named her after the jazz bassist Thundercat (not the eponymous 1980s cartoon). But living with a bunch of jazz musicians likely hadn’t given her a taste for Coltrane’s A Love Supreme, so much as it had taught her how to smoke pot and say “killin’” a lot. And she certainly hasn’t responded positively during the many, many times I’ve sung to her.

So I turned on the cat music. Perhaps “Rusty’s Ballad,” a cat “ballad” that ostensibly “provides the sound of suckling in feline music,” would appeal to the more sensitive parts of Thundercat’s nature. Maybe the ballad would have the same effect on her that Celine Dion songs do on the burly construction workers who cry at her concerts. I played it for her to find out.

As you can see, Thundercat’s curiosity was piqued by “Rusty’s Ballad,” especially when the tune started to reach its soaring crescendo (the key change in “My Heart Will Go On,” if you will). But she appeared to revert back to her typical state of sprawling all over her father’s desk and rubbing her bathroom parts on his keyboard shortly thereafter.

I thought perhaps “Spook’s Ditty,” the track described as “sonic catnip” on the Music for Cats website, would pique Thund’s interest. Ditties, the site said, “incorporate stylizations of some of the animal calls that are of great interest to cats” and “are meant to arouse interest and curiosity.”

The last time I saw Thundercat display interest and curiosity, she was disemboweling a cockroach in our bathtub. Could “Spook’s Ditty,” a swirling melange of harps and chirping bird sounds, be more interesting to Thundercat than small insect torture?

Don’t roll your eyes at me, Thundercat.

My final hope for getting Thundercat to join the music appreciation society was “Cozmo’s Air,” featuring “timing and cyclic rhythms of purrs” that appeared, to my untrained, non-feline ear, to sound like something off one of Animal Collective’s first albums. We played it for her while she was napping.