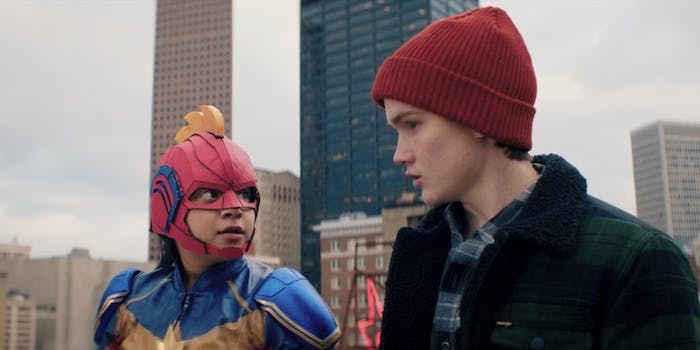 Why Ms. Marvel fans are mad about Kamala Khan’s new powers on Disney+

The MCU usually strikes a good balance between loyalty to Marvel comics canon and introducing new ideas to improve classic stories. For instance, Black Panther and Shang-Chi updated certain characters to avoid racist themes from the comics, and those changes were well-received. However, the upcoming Ms. Marvel Disney+ show is facing criticism for making similarly drastic changes—this time for less obvious reasons.

Based on some early promotional art for the show, Marvel fans are theorizing that Disney+ will reboot Kamala Khan’s superpowers. Instead of being able to shapeshift and change the size of her body (a power that falls somewhere between Ant-Man’s technology and Mr. Fantastic’s stretchiness), it looks like she’ll have energy-construct powers like DC’s Green Lantern. So far, two pieces of leaked Ms. Marvel art depict this new MCU power:

To most viewers, this probably doesn’t seem like a major change. It just means that Ms. Marvel’s giant fists will be a CGI energy weapon instead of “embiggened” parts of her actual body. The problem is, Kamala’s superpowers aren’t just about punching. Her origin story ties into the comic’s exploration of race and identity.

The comics introduce Kamala Khan as a Pakistani-American Muslim teen who idolizes Carol Danvers, aka Captain Marvel. So when she gains her own superpowers, Kamala models herself after Carol. She literally transforms herself into a blonde, blue-eyed woman, because in the words of the comic’s writer G. Willow Wilson, “Captain Marvel represents an ideal that Kamala pines for. She’s strong, beautiful and doesn’t have any of the baggage of being Pakistani and ‘different.’ ”

Kamala’s origin story is all about embracing her own identity. It’s also a direct commentary on the concept of representation: Kamala has never seen a Pakistani-American superhero, so she automatically follows a white role model instead. Her first storyline is a journey from copying Captain Marvel to forging her own path (and designing her own costume) as a hero. So if Disney+ removes Kamala’s shapeshifting powers, the MCU can’t tell this story. A lot of fans obviously object to this change.

Disney’s Ms. Marvel doesn’t premiere until mid-2022, so its creators haven’t commented on any potential changes to Ms. Marvel’s powers. There’s a popular theory that the MCU updated Kamala in order to prioritize Mr. Fantastic in an upcoming Fantastic Four reboot, since he’s the most famous character with stretchy powers. However doesn’t seem especially likely, because Reed Richards and Kamala Khan are very different characters. The MCU already includes other heroes who share more similar concepts:

The most plausible explanation is more pragmatic: Body-stretching powers look offputtingly weird in live-action. The Ms. Marvel comics have a stylized, exaggerated aesthetic, but a realistic version runs the risk of entering body horror territory. It’s hard to make human body parts stretch and expand in a way that doesn’t look gross and disturbing! In fact, this is a recurring problem for live-action versions of Mr. Fantastic.

Ms. Marvel‘s first teaser shows Kamala wearing an ill-fitting Captain Marvel costume and saying, “It’s not really the brown girls from Jersey City who save the world.” That’s a direct callback to the themes of her comic book origin story, regardless of what her powers look like. So while actress Iman Vellani may not physically transform into Brie Larson’s Carol Danvers, her role isn’t necessarily the drastic departure that people fear.