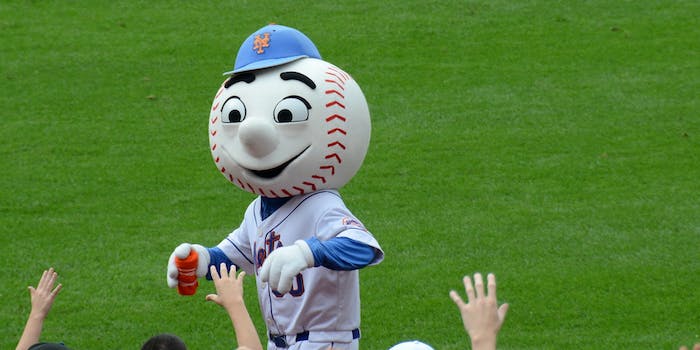 He's already facing about as much ridicule from his fellow mascots as his team usually faces from baseball fans.

Mr. Met just joined Twitter—and he’s already facing about as much ridicule from his fellow mascots as his team usually faces from baseball fans.

After messing up his first tweet with his gloves, he finally seemed to get the hang of it.

Sorry everyone, my fingers are too big. What I meant was “I’m on Twitter!” pic.twitter.com/4ZI84Oiw77

Instead of just welcoming him with open arms, the other mascots on Twitter took a few swings at his wife (who isn’t on Twitter).

Hey @MrMet welcome to Twitter! BTW, can you ask Mrs. Met why she won’t call me back? pic.twitter.com/MnKEbagKLQ

Mr. Met responded and showed that he wasn’t worried. Besides, Sluggerrr, the Kansas City Royals mascot, has a picture of a different sort (NSFW) to worry about.

Despite the rivalries on the field, the other mascots started teaming up, at least when it came to ribbing Mr. Met.

Mr. Met didn’t respond to any of the other mascots and went back to posting the sort of thing someone new to Twitter would post.

Good morning #Mets fans! Am I supposed to take a picture of my breakfast or something? #NewToTwitter #OhThatsInstagram