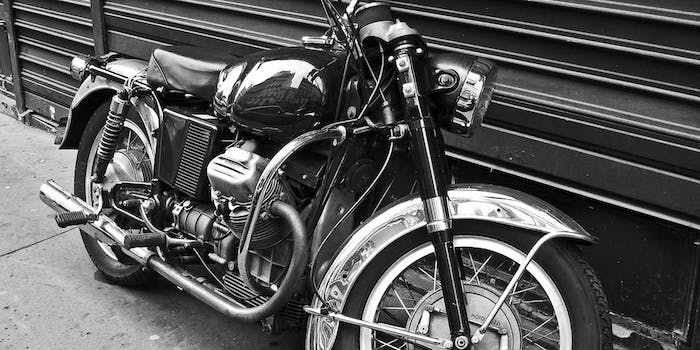 We have a lot to learn from this youngster.

You might think this is a video of a burly, tan dude in black jeans wearing a black bandana and no shirt crashing his big black motorcycle while on parade. And you’d be right—to a certain extent.

But this video is really the story of a relentless tween looking for a fist-bump from this man.

Three times the young lad seeks the fist-bump, and it is only on the third that he receives one—albeit reluctantly—from his burly idol.

The first time, the kid seems somewhat pathetic. Why is he bothering this Mr. Clean lookalike, who has just crashed, who has more important things to do than offer a fist-bump? The tween comes dashing out from the crowd, pretending to help but really just getting in the way.

The second attempt sees the tenacious young hopeful wedging himself between the giant and a bystander handing the man some articles of clothing that had been lost in the crash (a shirt is not, apparently, among them). Once more, the boy’s advances are ignored.

A normal person would slink back to the sidewalk, defeated, humiliated, full of shame and regret for the choices he’s made. Not this kid.

And so it is as the man remounts his motorcycle (chopper?), the youth standing beside him, resolute, that the fist-bump comes to fruition.

We can all learn a lot from this youngster’s perseverance, I think.

Photo via Glen Edelson/Flickr (CC BY 2.0)