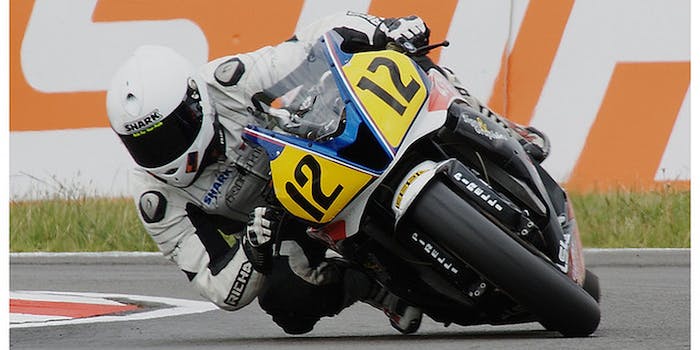 How does this guy get up from this ridiculous crash and win a race two days later?

You might not know much about MotoGP, the world’s premier motorcycle racing circuit. Hell, you might not have even heard of MotoGP until 16 words ago. But let me tell you something: The guys and girls who ride on the circuit are tough. Tougher than asphalt, perhaps.

How else do you explain a guy like Sam Lowes sustaining a crash in qualifying laps like the one below and then coming back to win his race two days later?

Not only does Lowes go flying onto the track, but watch what happens at the 8-second mark.

Yeah, getting crashed into by your own motorcycle is pretty much the definition of adding insult to injury (with a little more injury thrown in for good measure). Yet, somehow, Lowes wasn’t badly injured.

Sore this morning! @daverockyryan you been over in my sleep and done me in!!!!! Feel like gone 12 rounds!#sore pic.twitter.com/EPCvvT4OhT

My body is feeling this weekend now!!!!! Mega mega job by @clinicamobile meant I could be 100% in the race! #soreback pic.twitter.com/tLKXF1An3D

And somehow, while competing in the Moto2 race—kind of the equivalent of Class AAA in professional baseball as compared to the major leagues of MotoGP—on Sunday at the Circuit of Americas track in Austin, Texas, Lowes won it. Not only that, but it was his first professional win at that level. Not only that, but Lowe’s immense crash on Friday was actually his second accident of the day.

As you can see below in a video from 2013, Lowes isn’t a stranger to riding the asphalt.

But just like most of the MotoGP crashes, these riders get right back up and continue racing. And sometimes, after a horrifying-looking mishap, that rider wins for the first time 48 hours later.

Feel good waking up this morning yesterday was a good day!! 💪💪👍👍🏆

Photo via Stuart Bassil/Flickr (CC BY 2.0)